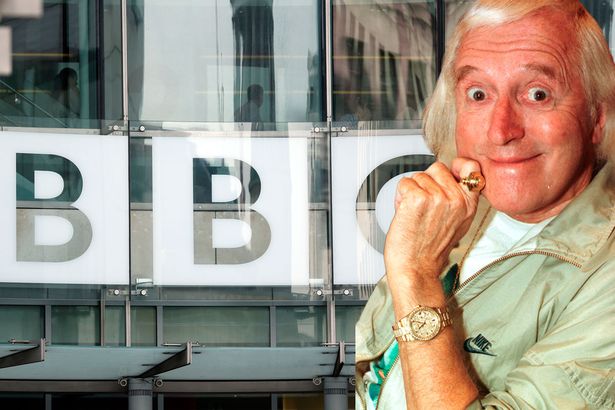 A woman who was molested on live television by notorious pedophile Jimmy Savile, has slammed the inquiry in which BBC heads claimed that they were unaware of his sex crimes.

Sylvia Edwards was just 18-years-old when she stood next to Jimmy Savile on Top of the Pops in 1976. The disturbing footage shows her trying to get away from him as he speaks calmly to the camera. “I tell you something, a fella could get used to this,” he says with his hand up her skirt. What a sociopath.

“I felt his fingers go towards my bottom. It was disgusting. I felt so ashamed,” she said.

Ms Edwards, now 58, and many others expressed their anger after a high court judge found that the BBC was NOT to blame for failing to uncover his abuse.

The retired judge, Dame Janet Smith, condemned the BBC in the report for its “deferential culture” and “untouchable stars”, and for having managers who were “above the law”.

However, she also believes that no senior BBC head  ‘heard or knew’ of his abuse of young people.

“Of course the BBC knew what Savile was doing. In my case it’s even on video for God’s sake,” she said to the Sun.

The draft report, which had been leaked to Exaro News, suggests that Savile had carried out four rapes, one attempted rape, and 61 sexual assaults while at the BBC. In 2011, at the age of 84, Jimmy Savile died. As a result, he will not be facing any justice for his actions.

Liz Dux, an abuse lawyer at Slater and Gordon who represents 168 of Savile’s alleged victims (many of whom were allegedly abused at the BBC itself) said:

“It is deeply disturbing that this inquiry appears to have concluded the same culture which allowed Savile to commit his appalling offences with impunity still persists today.

“That little has been done at the BBC to prevent another predatory abuser using their celebrity and influence to target the young and vulnerable is of grave concern.

“I find it incredible that 107 people gave evidence to having heard rumours of his depravity and inappropriate sexual behaviour yet no one in a position of authority seemed to be aware.

“Now, more than ever before, mandatory reporting legislation needs to be brought in to make it a crime to turn a blind eye to this sort of offending.

“It also has to be said that Savile’s victims who gave evidence to this inquiry will find it upsetting that a report of this nature and sensitivity has been leaked in this way.“

This Article (“BBC knew what Savile was doing, in my case it’s on VIDEO”) is free and open source. You have permission to republish this article under a Creative Commons license with attribution to the author(CoNN) and AnonHQ.com.