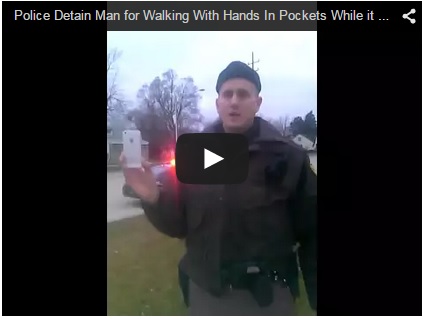 Written by: Llywellyn Bird at the antimedia.org

First broken by the Pontiac Tribune Friday evening, the story of Pontiac, Michigan, resident Brandon McKean’s encounter with an Oakland County Sheriff’s officer on Thanksgiving has taken on a life of its own, with critics voicing concerns over police invasion of privacy as well as potential racial profiling. Both police and McKean responded today.

The Sheriff’s Office, in a statement posted to Facebook along with the officer’s video of the incident, claimed that the original video, as well as initial media and social media responses, mischaracterized the event for the purpose of advancing an agenda:

“Often times, individuals share things without knowing the facts and in some cases promote a specific agenda unrelated to the reality of the situation. Shocking that the internet does not tell the full picture or people use this for an agenda-right?”

Of the call to police sparking the incident, the statement reads that: “[the call] originated from a nearby business that had been a victim, as well as its employees, of seven robberies.”

“The caller and his employees were concerned about the individual who had walked by the front window of the business five or six times, while looking inside with his hands in his pockets. Fearing for their safety, the business dialed 911 and the Deputy responded.”

The details of the business having been robbed seven times was new as of this statement, and according to McKean, was not told to him at the time of the stop.

McKean also contested the Sheriff Office’s characterization that he had walked past the business five or six times, telling The Anti-Media on Monday that he had simply walked to a friend’s house and back, and that he was not notified of this detail by the officer, either. Asked by the Oakland Press about the incident, McKean said he originally suspected racial profiling, but could understand why an officer was dispatched.

“Originally, I thought it was racial profiling, either on behalf of the officer or the civilian who called,” McKean said Monday.

“But when I heard the (911) call that was made … I guess I understand why they called.”

On whether McKean was ‘detained,’ the Sheriff’s Office denies that assertion.

“The Deputy did not detain or pat down the individual and considering the nature of the call responded in a very restrained and professional manner.”

In the video, the officer’s cruiser can be seen on the road with its lights on, which, when asked by the Pontiac Tribune, McKean said that he believed this amounted to an involuntary stop, one that would not allow for him to keep walking freely.

What police apparently fail to recognize is that having hands in your pockets is an alarmingly low standard for reasonable suspicion. And if Brandon McKean was not being detained, he certainly did not believe he was free to continue on his way.