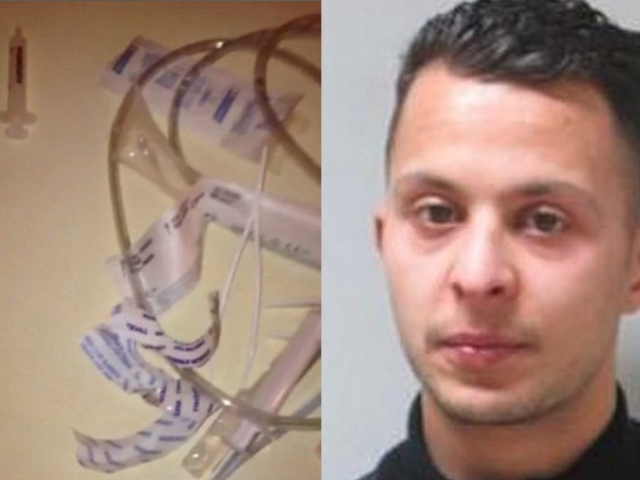 If you need any proof that ISIS consists of individuals who aren’t true Muslims—or are followers of any religion beyond their self-centered lust for power—footage of the hotel room that was used by the Belgian terror cell a day before they went on a killing spree, shows that it was littered with syringes and needles.

ISIS is literally a gang of drugged-up lunatics.

DNA evidence was used to prove that they had used the hotel room.

Survivors of the Bataclan concert hall attack, had previously claimed that the gunmen were “like zombies,” and believed that they were high on drugs.

The food of choice for the doomed terrorist? Pizza and chocolate cake packaging was found in the hotel room. I do believe prisoners on death row get a better last meal than that.

“It [the hotel] allowed them to use rooms 311 and 312 of the hotel in Alfortville,” said a source close to the criminal inquiry. “The hotel does not have video-surveillance camera. The judicial police have found traces of DNA and confiscated the hotel’s computer desk from reception.” Of course there wouldn’t be any video footage…

Ibrahim Abdeslam (a suicide bomber who blew himself up outside the Comptoir Voltaire café) was identified by the woman who ran the hotel- he had shown her his ID when registering.

“They were very kind. There was nothing noticeably strange about them. They were nice, proper and well dressed.”

“They didn’t have beards and were wearing normal clothes,” she said to Europe 1.

Ibrahim ran a drug den prior to becoming a terrorist; not much had changed, it would seem. He used to run a cafe, according to an anonymous neighbor. “Ibrahim was the proprietor, but the cafe is closed now. I used to go there every day after work, on my way home. We would go there to smoke hashish, drink alcohol, no problem.”

“Ibrahim used to go to parties, he would drink alcohol, smoke. But he stopped drinking alcohol in the last year,” he added.

It would seem that keeping its recruits perpetually high, barely rational and extremely susceptible to suggestion is one way ISIS could convince the fools to carry out their atrocious deeds.

I suppose I might be giving ISIS too much credit… but one wonders how much Afghanistan’s surge in poppy opium production—previously banned by the Taliban but currently protected by the US, who were also  simultaneously “accidentally” financing ISIS—has to do with this…

This Article (Paris Terrorists Were Pumped Full of Drugs Before Their Attack ) is free and open source. You have permission to republish this article under a Creative Commons license with attribution to the author(CoNN) and AnonHQ.com.