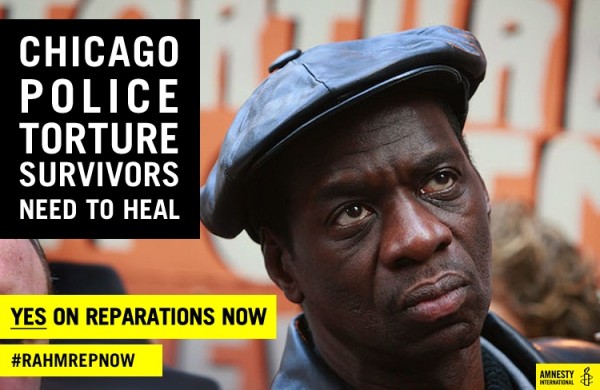 Victims of a racist police regime under Commander Jon Graham Burge, in the city of Chicago, have finally told reporters the ordeal they suffered when Burge was the commander of the Chicago Police Department (CPD).

Burge gained notoriety for torturing more than 200 criminal suspects, mostly blacks, between 1972 and 1991, in order to force them to confess to crimes they never committed. But despite this heinous crime, he was never brought before the law until 2011, when a District Judge sentenced him to four and a half years in federal prison for perjury. Law experts say because of the statute of limitations, Burge was not fully punished for his actions. Instead, Burge only received the minimal sentence for lying about the torture he had presided over.

However, he was released from prison on October 3, 2014, after serving three and a half years. This has now angered many victims, who now believe justice has not been done.

Surviving victims said during Burge’s time as the commander of the CPD, he oversaw a literal torture ring for innocent black people. His officers scooped up innocent blacks from the streets and framed them with crimes. It is said, since the police could not solve the city’s crime cases, they frequently choose a random black person from the streets and tortured the person into confessing. The aim of these dreadful actions was to ensure that it would look like they were carrying out their mandated duties.

Officer were also said to have tortured these innocent victims with electrical shocks, with some being shocked on their genitals. Other victims also suffered suffocation, bludgeoning, and other serious abuses.

Activists against the release of Burge said he has not only been released, but he will also be entitled to $4000-per-month pension; all the while, those who suffered still bear the emotional and physical scars of what he did to them. One of the victims who spoke out recounted how police under Burge’s command kidnapped him. After this terrible ordeal, they then took him to a police station where his family and friends could not be reached.

Once in the police station, the officers tied a bag over his head. They then hooked up electrical devices to his body and shocked him. He said the officers then continued shocking him over and over again, suffocating him, until he confessed to a murder he had never committed.

“I need some help. I try to hold my emotions back because I don’t want people to see me like that. … My family has been through a lot,” a victim only identified as Holmes told a crowd of reporters. When Burge was released, Mayor Rahm Emanuel, apologized officially on behalf of the city. He called Burge’s torture ring a “dark chapter in the history of the city of Chicago.”

Activists have urged victims to file a Federal Civil Lawsuits against Burge and his cohorts, as the torture and abuse they suffered degraded their status as human beings and should not go unpunished.

This Article (Video: Victims of A Racist Police Regime In The City of Chicago Finally Speak Out) is free and open source. You have permission to republish this article under a Creative Commons license with attribution to the author and AnonHQ.com.