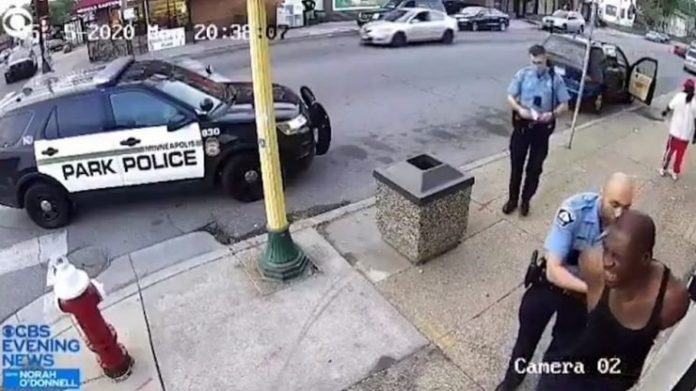 As the fallout continues around the Monday night killing of George Floyd by the Minneapolis Police Department, new footage has emerged showing the precise moment when Floyd was pulled from his car and placed in handcuffs during the initial stages of the encounter that ended with him pinned down by the neck for several minutes and ultimately dying.

The video published by Fox 9 shows dashcam footage of Floyd, a 46-year-old Black man, being roughly manhandled and forcibly removed from his Mercedes-Benz ML 320 SUV.

In a separate CCTV video clip obtained from a nearby restaurant by CBS News and posted last night to Twitter, another angle of the altercation can be seen. Floyd appears to be passively sitting against the wall while in handcuffs before an officer lifts him up to stand. The two officers then walk Floyd toward the car.

Neither video appears to show Floyd resisting in any fashion or form.

However, the videos precede the horrific footage captured next by witnesses that has been shared millions of times on Twitter and other social media users across the world.

In the footage that emerged hours after the slaying, Officer Derek Chauvin is seen pressing his knee into Floyd’s neck for about eight minutes until the 46-year-old was entirely limp and unconscious. For minutes during the encounter, Floyd could be heard complaining that he could not breathe or move, and that “my stomach hurts, my neck hurts, everything hurts.”

In the meantime, outraged onlookers in the community begged Chauvin to stop choking Floyd. In response, an Asian-American officer identified as Tou Thou joked, “this is why you don’t do drugs, kids.”

In a later press statement from the Minneapolis police, Floyd is alleged to have committed an act of “forgery” before he was ordered out of his vehicle at around 8 p.m. Floyd was also accused of being “under the influence” and of having “physically resisted officers,” although the new video casts serious doubt on the police department’s claims.

Straining all credulity, the statement also tried to depict the officers as showing concern for Floyd while they choked him to death. The statement said:

“Officers were able to get the suspect into handcuffs and noted he appeared to be suffering medical distress. Officers called for an ambulance. He was transported to Hennepin County Medical Center by ambulance where he died a short time later.”

On Wednesday, attorney Ben Crump, who is representing Floyd’s family, credited local residents for providing video footage of the incident.

Without such video, Minneapolis police “would’ve gave a false narrative and they would’ve swept it under the rug,” he told Today. The lawyer asked:

“How many more of these senseless, excessive-force killings by the people who are supposed to protect us can we take in Black America and all of America?” He added:

“It’s an ‘I can’t breathe’ again case in 2020, and it’s worse than Eric Garner in many ways because you hear the people even pleading with them, ‘Please get your knee off his neck, have some humanity, this is a human being.”’

Comparisons have been drawn to the 2014 killing of Eric Garner, a 43-year-old Black male who was placed in a chokehold by New York City police and similarly died begging for his life and crying “I can’t breathe.”

The killing of Garner came less than a month before the killing of Black teenager Michael Brown in Ferguson, Missouri, and precipitated one of the most active years of protest and community unrest the U.S. had seen in decades.

Crump, however, believes that the killing of George Floyd in broad daylight was even “worse.” He explained:

“I mean, it was 8 minutes. It is in many ways worse than Eric Garner as they have his knees on his neck and he is begging, pleading for not one minute, not two minutes, not three minutes but eight minutes – begging them to let him breathe so we have ‘we can’t breathe’ again in 2020.

“It just takes you back to Eric Garner and now we have another black man saying to police ‘I can’t breathe” and them not offering any humanity.’

While Crump believes the firing of the officers was a “good first step,” he also sees it as far from enough in terms of attaining justice for the deceased Floyd – a sentiment echoed by thousands of community members who chanted slogans like “no justice, no peace” and waved signs reading “jail killer cops” last night in Minneapolis’ Third Precinct.

“I think the officer should be charged with murder,” Crump told TMX.news in reference to Derek Chauvin, the officer who had his knee on Floyd’s neck.

While a total of four officers on the scene have been fired, only Chauvin and Thou have been identified so far – both of whom have a history of use-of-force complaints, reports the Minneapolis Star-Tribune.

Derek Chauvin, 44, is a 19-year veteran of the Minneapolis Police Department. He was present in 2006 when a fellow officer fatally shot 42-year-old Wayne Reyes, who is alleged to have pulled a shotgun on the group of police.

Within two years, Chauvin himself shot and wounded Ira Latrell Toles in the abdomen during a domestic dispute call after the latter allegedly tried to grab an officer’s gun.

Tou Thao has also had a troubled history of interactions with residents. He was sued in 2017 by one Lamar Ferguson, who alleges that Thao and his partner Ofc. Robert Thunder handcuffed him, threw him to the ground, while Ferguson kicked him and Thao punched him. Ferguson was walking home with a woman who was eight months pregnant at the time. He was later taken to the hospital for treatment before humiliatingly being transported to jail wearing only underwear and a t-shirt, against the urgings of hospital staff.

Ferguson later settled out of court with the MPD for $25,000.

Neither of these videos below appear to show George Floyd resisting in any fashion or form:

New video sent to us shows the moment George Floyd was removed from his vehicle and handcuffed on 38th and Chicago.
Video courtesy of Christopher Belfrey pic.twitter.com/MiIIula4sA

MORE: Video obtained by CBS News shows what appears to be the start of the confrontation between George Floyd & Minneapolis police officers. A restaurant's security footage shows cops taking him into custody, but the restaurant owner says it does not show Floyd resisting arrest. pic.twitter.com/KR8r7B1WPl