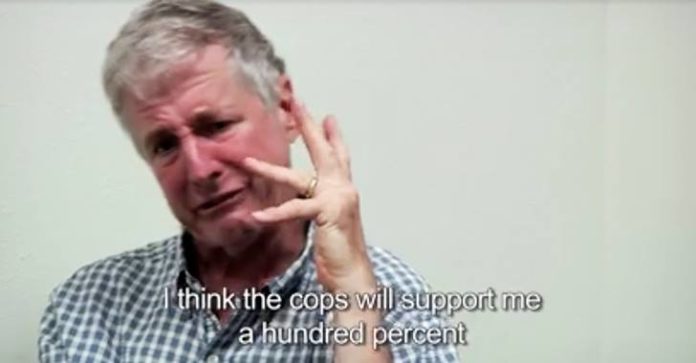 As research and anecdotal evidence increasingly indicate cannabis has medical benefits, a new series of videos from a man suffering from Parkinson’s disease highlights just how vital the plant can be.

Larry Smith, a former police officer, began to suffer from the debilitating neurological disease twenty years ago. In 2011, filmmakers began documenting his experience for the upcoming film, Ride with Larry. The documentary and accompanying awareness campaign “seeks to enlighten audiences to the human cost of Parkinson’s disease while providing insights into the tangible benefits of an active lifestyle, particularly through recumbent cycling,” according to the film’s Facebook page.

More recently, Larry began to experiment with medical marijuana to treat his worsening symptoms. In a video uploaded to Ride with Larry’s Facebook page last week, he arrives in San Diego, California, to obtain a license.

“My symptoms are a great deal more obvious than ever before, and the pain is a little sharper,” Larry says with some difficulty speaking.

“Larry’s at the point where he’s having so much trouble walking, now he takes twenty pills a day,” his wife Elizabeth explains, noting that increasing the dose could increase the side effects.

While in San Diego, Larry and his wife visit a medical marijuana doctor to obtain a prescription.

“These are not the days of Reefer Madness,” Larry observes in the video, referencing a 1936 propaganda film meant to demonize cannabis use. “Yet I and millions of other people can’t have it without facing serious jail time.” Larry currently lives in South Dakota, which does not have a medical marijuana program.

In Part 2 of the series, Larry uses his prescription to purchase $40 worth of the plant at a dispensary in an attempt to ease his pain and rigid joints. Elizabeth tells the “budtender” at the dispensary that the side effects of Larry’s pills have actually contributed to his dyskinesia. Further, she also discloses that every time she fills a prescription for him, it costs about $3,000, pointing out the stark difference in cost between pharmaceuticals and cannabis.

Though in Part 2, Larry buys actual buds, in Part 3 of 3, he meets with another man suffering from Parkinson’s disease who gives him cannabis oil to place under his tongue. His relief is almost instantaneous.

According to the video’s description:

“With a few drops of cannabis oil under his tongue, Larry’s severe dyskinesia (uncontrolled movements), loss of voice, and tremors are calmed within in minutes! We didn’t even edit the footage because the results were so startling.”

Sure enough, the footage shows Larry placing the drops under his tongue before lying down. After just a few minutes, he sits up and it becomes apparent his uncontrolled movements have largely ceased.

His friend says, “I think you’ve calmed down.” Larry simply says, “So quickly,” as a smile comes over his face.

“My voice is coming back,” he also observes. In a voiceover, Elizabeth notes how his hands became “rock steady” after he tried the treatment.

“It works most of the time,” his friend observes after he sits up. Larry imitates the sound of a heavenly choir to demonstrate his immense relief.

“Did you guys eat lunch?” he asks the others in the room. “You hungry now?” his friend with Parkinson’s inquires. “Funny, I am,” he replies.

As the video ends, Larry observes that “A person like me could really use marijuana. And it makes me pretty angry that I can’t get it in my home state.”

At least one academic expert shares this frustration.

As Dr. Daniele Piomelli, a professor of Pharmacology at UC Irvine’s medical school, says in Part 3 of Larry’s series:

“The number one frustration that I have is knowing that there is this untapped potential — that comes from what marijuana is teaching us — to generate new medicines, and being stuck because of financial issues or political issues. That is extremely frustrating.”

Dr. Piomelli, who runs a lab at the university, discussed recent research on cannabis’ effect on Parkinson’s disease:

“We know from animal experiments that the endogenous cannabinoid system is very important [in] regulating motor activity, the very type of activity that is impaired in Parkinson’s disease. From animal experiments, we also know that boosting certain branches of the endocannabinoid system is helpful in relieving symptoms of Parkinson’s. Finally, from anecdotal information, we know that certain patients who smoke marijuana experience relief [from] their symptoms.”

Further, a 2014 study published in Clinical Neuropharmacology, researchers concluded there was “significant improvement of sleep and pain scores” for patients using cannabis to treat Parkinson’s. They noted “no significant adverse effects of the drug were observed” but cautioned further research was necessary.

A 2014 study published in the Journal of Psychopharmacology explained that cannabidiol, or CBD, a non-psychoactive endocannabinoid, had the possible effect of “improving quality of life measures in PD patients with no psychiatric comorbidities.” They also advised more research was needed.

Even without the scientific research to back up the plant’s effectiveness, Larry’s experience may provide hope to countless others suffering from debilitating ailments (Part 3 has been viewed over 20 million times as of this article’s publication).

Though cannabis is becoming legal in a growing number of states, many people suffering from illnesses are unable to access the treatment. As Elizabeth said in Part 1:

“I do not like the idea of breaking federal law. Even though the state law in California is very clear that it’s permissible, I’m still uncomfortable. But, you know, if this is the only thing — and as far as I know we’ve tried everything, and this is the only thing that’s left…we are going to give it a go and see how it goes.”

And as she says in Part 3 after witnessing her husband finally experience relief:

“We now know that medical marijuana controls dyskinesia, and yet it’s not available to us.”

Still, as stories like Larry’s continue to accumulate and the war on a plant continues to fail, the trend of legalization throughout the United States shows no signs of stopping.

This article (WATCH: Former Cop Tries Cannabis As Last Resort to Treat Parkinson’s Disease) is free and open source. You have permission to republish this article under a Creative Commons license with attribution to Carey Wedler and theAntiMedia.org.