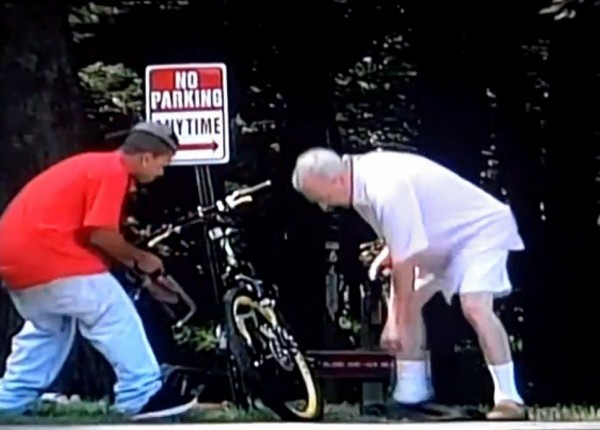 A group of researchers have staged a social experiment to determine how people in the United States react differently to thieves of a certain race. To do this the team used two actors to portray a bicycle theft in public view; hidden cameras where used to capture the scene.

Armed with bolt cutters, a chain saw and a hammer, Justine Kelly, the white actor who was pretending to be a thief, began his mission to free and steal the bike. Passers-by looked on, some suspiciously. Many people stopped and stared at him in action and some people even questioned him.

“I guess I have to ask, is that your bike?” A man finally asked Kelly. But Kelly replied “I guess technically no.” Strangely, the man walked away without trying to stop him or call the police. Even two young African-American women gave Kelly the benefit of the doubt because of his race. One of the women frankly admitted to the researcher, “I remember thinking, young, white men don’t usually carry burglary tools.”

Her friend also said “Our thoughts were, ‘Well, if he had been black or a person of color, the police would have been called in immediately.”

That was how the story ended for Kelly. Nobody tried to stop him from trying to steal the bike. Instead, people made false assumptions.

But when an African-American actor took Kelly’s place, the reactions were more pronounced. At one point, a crowd assembled around the purported thief and confronted him directly. One man pulled out his cell phone and said he was calling the police.

In fact, the researchers filming the event had to step forward to prevent him from calling the police. Another man also tried to stop him by taking away the tools he was using to break-free the bike.

In the end, the reactions to the two purported thieves were very clear to the experimenters and anybody who watches the video. There most certainly is a racial stereotype surrounding the image of a thief. It is said the social experiment was filmed in 2010 and has gone viral on social media since it was published on YouTube.

According to the New York Daily News, in New York City, the police department reported that in the first half of 2012, the number of bike thefts across the city had increased by more than 25%. As reported by The Media Outlet, according to the National Bike Registry of the US, more than 1 million bicycles are stolen every year in the US.

This Article (Watch How People Reacted Differently To A Black And A White American Pretending To Steal A Bike, The Outcome Will Shock You [Video]) is free and open source. You have permission to republish this article under a Creative Commons license with attribution to the author and AnonHQ.com.