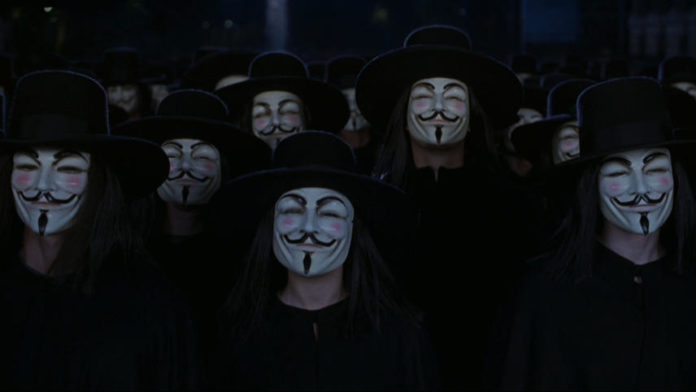 It’s time to explain the meaning behind the Guy Fawkes mask again—from the limited viewpoint of a rather common citizen. While it seems there is always a war waging somewhere on this planet, we live in a particularly turbulent time. Whether or not fanatical patriots wish to admit it, we live in a world filled with injustice and greed, often at the hands of those we’re supposed to trust the most. The corruption leaks down in the form of desperation causing brother to turn against brother. Citizens of nations everywhere are beginning to awaken from their sleep, and see the world for what it truly is. As a result, the Guy Fawkes mask has received a new form of recognition due to its direct link to the Anonymous Movement. For many who are unfamiliar with Anonymous, it’s easy to assume that this is a “group”, that it has a community, and a leader who coordinates underground meetings. This is not the case. There are no leaders. There is no application to fill out, membership fee, nor gang-style initiation process. The Anonymous Movement has become a means for anyone and everyone to take a stand against whatever issue they feel passionate about, be it global warming, or corporate corruption. There are those who call themselves Anonymous located on every continent, fighting for a multitude of causes. There is no set idea of what Anonymous stands for, unless perhaps justice and truth.

Because the Anonymous Movement is not understood, as well as being misrepresented in the mainstream media, many assume it’s an actual organization. It’s common to hear these people scoff at ordinary citizens for portraying themselves in the Guy Fawkes mask—as though they’re flashing a gang sign in a pompous attempt to portray themselves as a gangster, or perhaps these people feel as though you need to earn the right to wear the mask. This is a misunderstanding of what the mask has come to represent. The Guy Fawkes mask itself is now a symbol. For those who are actively fighting corruption around the world, it’s a symbol of their anonymity. For the average citizen who takes no part in activism, it’s a symbol of awareness. While Guy Fawkes was an actual historical figure, and the tradition of wearing a mask duringGuy Fawkes Night is long standing, the current Guy Fawkes mask was created by British comic artist, David Lloyd, and was used in the movie V for Vendetta. It wasn’t just the mask’s charming smile that caught people’s attention, but the message the movie portrayed. While the movie may be considered merely another mindless, mainstream production to some, to others it’s an artistic form of inspiration—a statement we can relate to in our current times. With the rise ofAnonymous, many people around the globe have begun to feel a glimmer of hope that we are on the verge of change, and the Guy Fawkes mask represents that hope. We bring to mind once more the image of a sea of grinning faces—all citizens standing together as one—and deep down we wish we could change the world as well.

We need to put an end to the assumption that the Guy Fawkes mask is something you have to earn the right to wear. We all either have, or will, experience injustice in our lives. We all have a voice, and an opinion. We need to stand together as one—one face, one voice, and let the corrupt institutions of the world know that our eyes are open. So on that note, to all of those who work 40+ hours a week and barely make ends meet, to the college students who cannot find work and pay their loans, to the women who endure sexual discrimination on a daily basis in order to keep their jobs, to those who’ve faced the brutality of law because of the color of their skin, to the mothers who cried for the children of Gaza—wear the mask proudly. It doesn’t matter if your face and name are known. It doesn’t matter whether or not you’ve protested at your capitol, or hacked a major database. What matters is that you are awake.