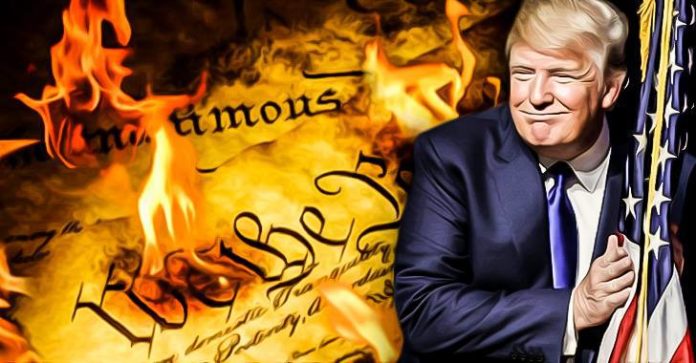 Well, hell must have frozen over, because we are all stuck with Donald Trump as our President for at least the next four years. While it has seemed like progress has swept the nation in many areas, with the stroke of a pen, all that we have fought for could soon be gone. Of all the possible horrors that Trump might unleash, the one that will affect us directly is the advancement of the police state. Regardless of what laws get passed, the police will be the front line on enforcement.

So, let’s start with the obvious. Abortion, legal marijuana and immigration will be the first to go. I’m not going to argue about whether or not Trump will allow the overturn of Roe v. Wade; the monsters he has surrounded himself with have already stated it will be a thing of the past. No matter what happens in Washington, your local police will be the ones on the front line arresting doctors out of women’s health clinics; jailing businessmen who own dispensaries; and rounding up illegal immigrants, otherwise known as Mexicans. We won’t feel the change as conservative law makers strip us of our freedoms, we will feel it when the cops are standing at our front door.

Aside from the enforcement of archaic laws that have yet to hit the books, what does a Trump presidency mean for the current issues of the police state we live in? The problems of policing for profit and racial profiling are inevitably going to get worse. What do you get when you cross a racist president with the prison industrial complex? You get great returns for stock holders, and so far, this appears to be more important to Donald Trump than human rights. Trump has already come out and stated that the racially discriminatory practice of stop and frisk will be implemented around the nation. Unfortunately for us, Trump doesn’t even understand what stop and frisk even is, but he knows he wants it everywhere. His lack of understanding will lead to the increased stop and frisk practices in your home town. Well, the President can’t do that, that’s a legal matter! Yes, but as soon as Trump fills that Supreme Court seat, every whim of the republican controlled Congress will be backed up by nine justices in black robes. This is where the real danger of a police state, under Trump, exists. People have faith in a legal system, that for a long time has been held in close balance by the Supreme Court. Those days are about to change. It has been this very balance of judicial power that has allowed us to believe that things will be safe forever. Trump and his conservative establishment cronies are going to pick one or more conservative justices that will undo all the progress we have made in the last fifty years.

While Trump has stated in the past that he agrees with medical marijuana, his top picks for Attorney General have been very clear on their positions. Whether it is Rudy Giuliani or Chris Cristie, pot is on the chopping block. Cristie even said during his presidential run that if he gets into power, the “pot party” is over in places like Colorado and California. The research and studies showing how cannabis can help treat epilepsy, cancer or the dozens of other ailments, means nothing to these guys. Trump and his henchmen live in a fantasy bubble. Just because the people want it, and science backs it, won’t mean a thing when the police are sent to your house to seize your plants and haul you off to jail. Yes, my friends, the war on drugs, which seemed like it was on its way out, will be back with a fervor. What does this mean for Black Lives Matter and the seemingly never ending war against communities of color? Well, it’s not good. Trump has already stated that police are some of the most underappreciated people in our country. What I envision is a boost to law enforcement funding and a relaxing of the flow of equipment from the military to local police agencies. While normally a boost in law enforcement funding is a good thing, as it usually funds an increase in staffing levels and provide additional training, I don’t think we’ll be so lucky. With the threat of public unrest on the horizon, local law enforcement agencies will spend the money on additional weapons and crowd control devices. You’ll most certainly see an increase in armed tanks on the street, even more than we see already. Once you see a police tank on patrol, you’ll know it’s over. Heavily armed patrols will serve as nothing more than a reminder to the public to ‘not act up.’ For the atrocities that we currently see go unpunished, they’ve done so under a liberal administration with a borderline conservative Supreme Court. Do you envision a new-found justice under President Trump? As we have seen over the decades, our rights slowly erode with one judge’s flawed decision after another. We have seen nearly every constitutional amendment come under fire by those who seek to promote their own interpretation. Justice and freedom have taken a back seat to personal agendas. Under Trump, there will be a wave of right-leaning appointees whose influence on the vast numbers of public servants beneath them, will alter the way police interact with their communities. Under the guise of keeping us safe from Islam, which is becoming slightly transparent, or cleaning up our streets, which don’t particularly need cleaning, you will see a wave of domestic terrorism committed by police with no real goal or end in sight. They will be funded by the Trump administration and backed by the Supreme Court. This is a perfect storm for the Blue Lives Matter, folks.

This article (What Does a Trump Presidency Mean for the Police State?) is a free and open source. You have permission to republish this article under a Creative Commons license with attribution to the author and AnonHQ.com.