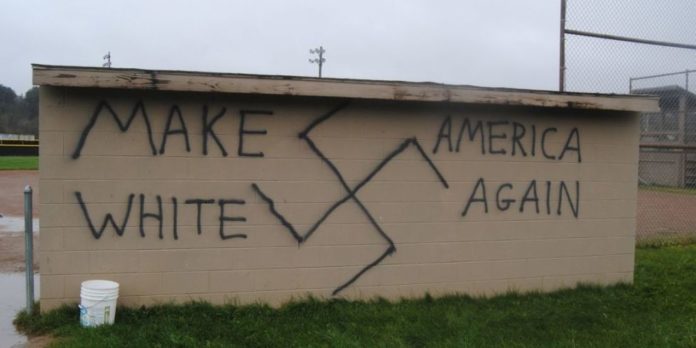 Of the many concerns Americans shared at the prospect of a nation ruled under Donald Trump, racism and sexism were at the forefront. As was easily predicted, these harmful mentalities spread across the nation the moment it was clear Donald Trump won the presidency – nearly every public discussion on YouTube blew up on election night with images of swastikas, and racial slurs. Horrifyingly, these mentalities have now infected those who are among the most impressionable in our society – our children.

In a report from Lehigh Valley Live out of Pennsylvania, students in the Southern Lehigh High school “have been subjected to classmates yelling gay slurs and the n-word in the halls, calling black students cotton pickers and using heil Hitler salutes.” District Superintendent, Kathleen Evison, stated that it was a small number of students who engaged in the inappropriate behavior, but acknowledged that even one incident is too many. Evison included:

“Our student body is an extremely supportive and collaborative student body. This is very unusual for us to hear this kind of language and, obviously, very disturbing.”

Students from the Royal Oak Middle School in Michigan were recorded chanting “build a wall” in the school cafeteria. The incident was caught on camera by 12-year-old, Josie Ramon, who is a Mexican-American. Josie stated:

“Tears were running down my face. I was so upset. A friend went to the bathroom crying. Everybody was chanting along with it. She was scared. She looked really upset. I felt really bad for her. I knew I wanted evidence I could show my mom,” Josie continued. “It’s so unbelievably wrong. I had no tolerance of it so I recorded it.”

According to Democracy Now, who originally brought the information above to the forefront, a teacher posted in social media that a 10-year-old, female student had to be picked up and taken home after a male student grabbed her vagina. The boy apparently told school officials, “If a president can do it, I can too.” We were able to track down the original post:

The Southern Poverty Law Center (SPLC) reported over 200 incidents of hate-fueled intimidation and harassment on election day. In one of the reports that were directly submitted to the SPLC, a 12-year-old African-American girl was told by a boy who approached her, “now that Trump is president, I’m going to shoot you and all the blacks I can find.” It was reported to the school, who has since taken appropriate action.

Many of those who voted for Trump are now trying to deny there are any racial tensions in the United States since his election. Many are calling it propaganda, and we’ve heard theories from those in denial that it’s either the FBI, the CIA, Democratic-paid trolls, or Soros-paid trolls (we’re sure we’ve missed a few theories, as well).

The Soros theory appears to be supported by the Podesta files (which we’ll get to in a moment), and the so-called Craigslist ads for anti-Trump protesters. There’s a couple of problems with the Craigslist ads however, with many of the ads that were mistaken as “proof” – that people were being paid to protest Trump – were in fact, legitimate ads looking for door-to-door canvassers. Other ads that blatantly advertised to hire anti-Trump protesters could never be verified as being legitimate, and since then, numerous other Craigslist ads have been created by obvious trolls. (source).

We can’t believe we have to point this out, but it’s highly unlikely George Soros, or the Clinton clan, would advertise for paid anti-Trump protesters on Craigslist, the same place people go for a no-strings-attached hand-job. And isn’t it strange that this would be advertised right out in the public for everyone to see, with obvious titles such as “STOP TRUMP,” and “seeking troublemakers”? You be the judge.

We’re not saying protesters were never planted (they probably were on both sides), in fact, reports are circulating that CNN was caught interviewing their own camera man as a so-called protester.

According to a report from RT, it was found by WikiLeaks through Podesta files from 2008, that Soros’s MoveOn.org organization was asked to help influence voters (presumably in Hillary Clinton’s run against Obama), and now it’s being speculated by RT and others that the recent protests opposing Trump’s presidency are supported by MoveOn.org. Many sources are saying this was supposedly confirmed by Moveon.org themselves in a public statement, however they deny it, stating:

“We’ve seen false reports circulating on right-wing blogs and in right-wing media outlets known for inaccurate reporting that MoveOn.org is organizing protests taking place across the country this weekend. Those reports are incorrect. In addition, we have seen false ads on social media sites purporting to be from MoveOn offering payment for protesters. Those ads are fake, and were not placed by MoveOn. We are not hiring protesters.”

George Soros is behind a vast majority of revolutions and coups around the world, we know this. However, it doesn’t mean Soros is behind every political uprising – this would insinuate no one is able to think for themselves. Soros has undoubtedly played his part in this year’s election, beyond being a major funder for Hillary Clinton, but there is, so far, no proof that anyone was hired through Craigslist ads to protest Trump (for those who are stuck on that theory); there are too many people currently protesting Trump’s election for them to all be paid by Soros (it’s not just anti-Trump propaganda); and with the vast amounts of racism and sexism within social media now, it’s hard to believe those are all paid-trolls or government agents, too.

The nation has gone insane, and as a reporter, it’s getting ridiculous trying to weed through the propaganda. But all propaganda aside, we are unfortunately now seeing the darker side of many Americans who feel empowered by yet another corrupt leader; and for our children’s sake, this has to be accepted along with all other issues, if it’s ever going to be fixed.

This article (Racism and Sexism in American Schools) is a free and open source. You have permission to republish this article under a Creative Commons license with attribution to the author and AnonHQ.com.