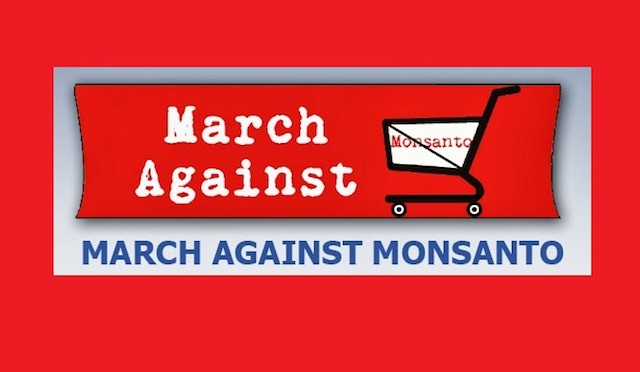 It is time to reclaim our Earth and prepare for the March Against Monsanto, which will begin on May 21st in a city near you.

Monsanto has, once again, waged their own assault against our rights, isolating, suing and ruining farmers, refusing to participate in GMO labelling and ignoring the warnings slapped on their ‘probable carcinogenic’ glyphosate.

Despite Monsanto’s claims that GMO crops would reduce the use of glyphosate (RoundUp), the use has actually increased “16-fold since the mid-1990s when GMO crops were first introduced,”the March Against Monsanto website reports. The results were taken from a geological survey, revealing the abuse waged on our crops.

Most people aren’t even aware of the use of glyphosate in pre-harvest wheat, where it is sprayed on crops to speed up the drying process. As a result, in recent times, we are consuming even more of this pesticide in our daily diets.

The march against Monsanto on May 21st will span across the globe, with over 428 cities and 38 countries participating – hopefully more with your participation.

Worldwide – it is time for the people to unite and stand up against the biotech giant.

Despite the fact that over 90 percent of citizens call for GMO labelling in the United States alone, this call is defeated every time by lobbyists. Therefore, it is vital that we make our voices heard this year. Given the recent declaration by the World Health Organization that glyphosate is a “probable carcinogen,” it is essential we stand up for our rights.

March Against Monsanto protests begin on May 21st. All media platforms, boots-on-ground activists and citizens are called to unite.

A complete list of events for May 21st has been listed here. If your city isn’t listed, you are invited to register it at the email address that is provided above the linked spreadsheet.

This article (Will You March for your Rights Against Monsanto in Your City on May 21?) is a free and open source. You have permission to republish this article under a Creative Commons license with attribution to the author AnonWatcher and AnonHQ.com.