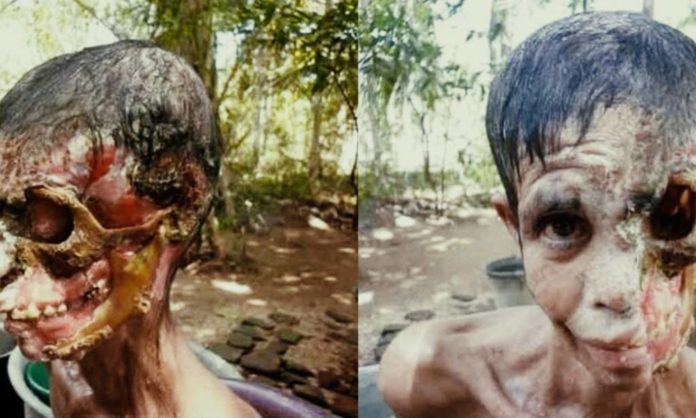 In 2010, prescription opiates accounted for 60% of overdose deaths in the United States — a country which spends over $51 billion a year to fight the drug war.  Fentanyl, a synthetic opioid 50 to 100 times more powerful than morphine, is now considered America’s new deadliest drug. That’s just a few statistics about the USA; every year, chemical drugs kill scores of people worldwide. While there is enough data available online with regard to drug overdose and prescription drug abuse, not many pay attention to/or inform users about the hazardous side-effects of the street drugs that are silently destroying their vital organs and, as The Independent writes, turning them into zombies.

Alltime10s has shared a list of the top 10 deadliest street drugs, warning people before they plan to get high on cheap, highly toxic, illegally made substances.

Burandanga, Devil’s Breath or Scopolamine: call it whatever you want to; essentially it is the most dangerous drug in the world. Blocking free will, it also wipes memory and proves lethal if taken in high doses. A derivative of the nightshade plant found in Ecuador, Colombia and Venezuela, one gram of scopolamine is capable of killing 20 people. The drug is so powerful that it can cause vivid hallucinations and respiratory failure. Under influence, people have robbed their own houses, been sexually assaulted, emptied their entire bank accounts, and have been abducted.

A lethal combination of soda, candy, and cold medicine, this cough syrup cocktail gives users a euphoric, woozy feeling. High levels of codeine present in a legal prescription drug for the severe cough and common cold, suppress the central nervous system and causes respiratory arrest, heart failure, and seizures. The drink is known to have killed members of the hip hop community, including producers Big Hawk and DJ Screw, and rapper Pimp C in 2007. Despite that, Purple Drank is endorsed by many top hip hop celebrities like Eminem, Kanye West, and Lil Wayne.

Mexican Drug cartels run a $20 billion industry on the habits of the 1.6 million Americans addicted to this most destructive drug in the world. When meth is smoked or snorted, it produces a pleasurable rush followed by euphoria, heightened attention and increased energy. Over time, however, it causes psychosis, brain damage, changes in physical appearance and death.

The morphine-like analgesic action of AH-7921, as a μ-opioid receptor agonist, has been found to be several times more potent than codeine and 80% more potent than morphine. An active ingredient in synthetic cannabis, AH-7921 mimics the toxic effects of heroin; mixing it with alcohol can lead to coma and respiratory failure.

Originally marketed as a legally high alternative to ecstasy, Flakka — made from the same amphetamine-like chemicals found in bath salts — can cause permanent psychological damage; organ failure; raise the human body’s core temperature to 41°C; cause hyperthermia, delirium and paranoia; and plunge the addict into a murderous rage. Abusers have made headlines by running through traffic naked, having sex with trees, impaling themselves on fences, and believing that they are Satan.

One of the world’s oldest drugs — originally prescribed as a painkiller to treat chronic pain and physical trauma — became illegal and one of the most destructive substances in the world in 1971. Today, over 13.5 million people worldwide inject, snort, or smoke this highly addictive painkiller. Heroin damages blood vessels; causes gum inflammation, muscular weakness, and insomnia; and weakens the immune system. Mixed with alcohol, heroin suppresses the same part of the brain that regulates the heart and lungs, resulting in brain damage, comas and death.

Whoonga, a cheap but highly toxic and addictive street drug widely available in South Africa, is added to marijuana and smoked for its relaxing and hallucinogenic properties. The white powder is made up of washing detergent, rat poison, and a combination of anti-retro-viral drugs used to treat HIV infection. Smoking whoonga poses severe health risks, including internal bleeding, stomach ulcers, heart failure and death.

It is estimated that one million Russians are addicted to the “flesh-eating drug” — a deadly mix of opioids, codeine, eye drops, and gasoline sold at a third of the price of heroin. The lethal combination of chemicals causes gangrene, rots you from the inside out, eats your flesh – making it scaly like a crocodile’s. Krokodil causes brain damage, organ failure and limb amputations.

This article (World’s 10 Most Deadly Street Drugs That Will Quickly Tear Your Body Apart ) is a free and open source. You have permission to republish this article under a Creative Commons license with attribution to the author and AnonHQ.com.