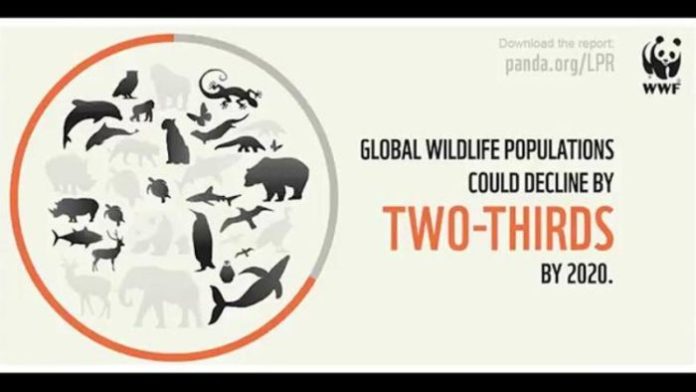 It is obvious that human beings have plundered the natural resources of the Earth recklessly. After killing its own kind in needless wars, driven by greed and evil, humans have extended their brutalities to the wildlife population.

A new report published by the World Wildlife Foundation (WWF) titled the Living Planet Report 2016 has revealed a disturbing picture regarding the relationship between the wildlife population and humans in the world. The Zoological Society of London (ZSL) also contributed to the report. The report said humans have wiped out so many animals, and in turn, the planet is on the verge of its first mass extinction since the age of the dinosaurs. According to the report, by the end of the decade, seven out of every ten of the world’s mammals, fish, amphibians, reptiles and birds will have been wiped out. The report is the biggest ever to have looked into the extinction of the world’s wildlife population.

The report also mentions some of the endangered wildlife species, such as the African elephants, tigers, mountain gorillas and giant pandas. The researchers who compiled the report revealed they assessed 14,152 populations of mammals, birds, fish, amphibians and reptiles. Overall, the numbers fell by 58% between 1970 and 2012.

Worryingly, there is no slowing in the falling of the numbers. It is said the numbers have been dropping by around 2% every year. The report predicted that by 2020, populations of vertebrate species could fall by 67%. The researchers said drastic measures will need to be implemented by governments and environmentalists, in order to stop this from happening. According to the researchers, factors accounting for this rapid decline of the wildlife population include poaching, farming, over-fishing, deforestation, climate change, the ditching of waste plastic, chemical and air pollution.

For example, the reported said the African elephant population has fallen by 111,000 in the past decade. This was said to have been caused mainly by poaching, especially in Eastern South Africa. Currently, it is estimated that there are just 415,000 elephants left in the whole of Africa. Again, there are now only 3,900 tigers in the world, as well as 1,864 giant pandas. The most endangered of the species is said to be the Amur Leopard. The report said there are just 70 of the Amur Leopard left in the world.

Terrestrial species populations dropped by 38% between 1970 and 2012. A staggering 81% of freshwater species fell within the same period. For marine creatures, based on 6,170 populations of 1,353 species of fish, birds, mammals and reptiles, the report found a 36% decline. The Director of Science and Policy at WWF in the United Kingdom, Mike Barrett, told MailOnline in an interview that if humans do not take immediate steps to stop the wildlife population from going extinct, the consequences will be massive for humans.

“For the first time since the demise of the dinosaurs … we face a global mass extinction of wildlife. We ignore the decline of other species at our peril – for they are the barometer that reveals our impact on the world that sustains us. Humanity’s misuse of natural resources is threatening habitats, pushing irreplaceable species to the brink and threatening the stability of our climate,” he said. Barrett also called for a collective action to halt the dangers ahead, revealing the situation could be stopped. “We know how to stop this. It requires governments, businesses and citizens to rethink how we produce, consume, measure success and value the natural environment,” he said.

In the past, researchers have suggested that the world has transitioned from the Holocene period into a new geological age, known as the Anthropocene. According to researchers, the Anthropocene period is characterized by human domination of the environment. Clearly, human beings have dominated the environment, and are doing more harm to it than good, mainly since the industrial ages.

This article (World’s Wildlife Population Faces Record Mass Extinction) is a free and open source. You have permission to republish this article under a Creative Commons license with attribution to the author and AnonHQ.com.