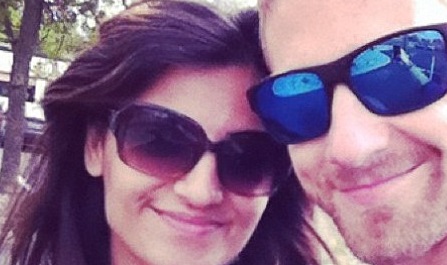 The lead writer of a controversial movie was found dead along with his wife and daughter in a Minnesota home Saturday afternoon. Officers went to the house Saturday after a neighbor called to report bodies inside. Three people were found dead and have been identified as screenwriter David Crowley, his wife, Komel, 28, and their 5-year-old daughter.

A statement from Apple Valley police Sunday morning said the case would be considered “an apparent murder-suicide” and the deaths would be investigated as suspicious.

Next-door neighbor Collin Prochnow said he went to the house on Saturday to ‘gather packages that were sitting on the front steps’ when he looked inside and saw the bodies. Prochnow told the Minneapolis Star Tribune that the family had not been seen since Christmas and that a dog was also in the house.

David Crowley had been the lead screenwriter for the movie Gray State which depicts a violent police state in post-crisis America as people reject government policy en masse in frustration over economic collapse and the breakdown of society. A Daily Mail article reported on the murders in the paper’s typical style of detailed gossip but failed to link the deaths to Crowley’s work on the movie, despite exploiting “conspiracy theory” stories for web traffic.

The film covers elements of conspiracy about FEMA camps which refer to the militarized police state response to civil unrest including forced detention camps and the liberal use of deadly force against unarmed people.

The film concept was more than 5 years in the making and after going public on Facebook in 2011, a popular trailer was released in August 2012 and now has nearly 1 million views.

Featured in the trailer are scenes of US military patrolling American streets, cameras in private homes, the introduction of mandatory RFID chips used for identification, tracking and more as well as economic collapse.

Production began with significant filming in March 2013 and seemed to gain momentum after over a year of gathering resources. Around the same time, a second page, Gray State: The Rise was started to provide a news feed of real world news which matched topics in the coming film. Various difficulties stalled production multiple times. An update in June 2014 suggested the project may progress but it is unclear if it materialized.

June 30, 2014
Update:
The past month I’ve been meeting with some LA-based producers, crew, and other industry contacts, and together we are building the team that will combine our passions and talents and belief in Gray State to optimize its message and reach of its exposure. This has been a truly exhilarating experience!
My attorney and I are reviewing the option contract this week, and once that sucker is signed this whole Gray State thing is going to finally, irretrievably, and monstrously take off for the stratosphere – and in such a way that the message will be preserved – and perhaps even continue in sequels, TV series, and video games. Seriously. Talk about taking over the main stream.
This has been my life’s work for nearly 4 years, and it is extremely gratifying to be backed by such a raging horde of super-fans. Thanks for your patience guys. See you at the premiere.
-dc

Unverified claims from personal friends suggest significant new funding may have been secured. A post on September 2014 provides the most recent insight as Crowley apparently answered questions for confused fans.

“Did Gray State the rise come out? I remember hearing it was coming out early 2014 but cant find it.”

The Rise suffered a catastrophic hard drive loss earlier this year. I am working to get it back together (hopefully for a FREE online release, you guys deserve a little something). I really have to be careful though, because a mishandled doc release could absolutely SINK production on the film or series. I am treading carefully, making sure that everything works out to the best.

It’ll either be a great success story a spectacular, highly visible failure, but either way, I guess we all put in our best shot, right? I guess that could be said about where the country is headed too.

“What exactly is your biggest hold up?”

I’m doing this by myself. I say “we” and “team” a lot, but when it comes to nuts and bolts work, writing, and leveraging the project into securing Hollywood money, it’s just me.

I hope to change this by reinvigorating the process and rebuilding a trustworthy team.

“I always figured a trailer was made out of clips of the movie once it has been completely filmed. how do you get a 2 minute trailer but not have a movie? i was confused and disappointed after watching the trailer and realizing there WAS NO MOVIE yet. er? what now?”

Nope, everything you have seen has been conceptual footage so far. Don’t be bummed, when you see what comes next it’ll be all new unseen.

“Will fan funding hurt your chances w/ other sponsorship? If not, why not open up to fan funding to help you reach your goal?”

We want to run a kickstarter (due to popular demand), but if we do, it’ll be for a very specific purpose, like hiring a behind the scenes crew to document production, run live broadcasts, and give constant updates to the fans. I NEVER wanted the fans to fund this. That’s like making your kids pay for their own Christmas presents.

“Is this a fake production seeking sponsor money? Because the movie has been in the making like 8 years now”

I wish. It would make things a lot easier.

“You guys should try to reach out to Alex Jones. He has funded a lot of documentaries and has connections in Hollywood. Maybe he can help.”
A raw version of the “Gray State Documentary” can be viewed below:

This article originally appeared on wtfrly.com