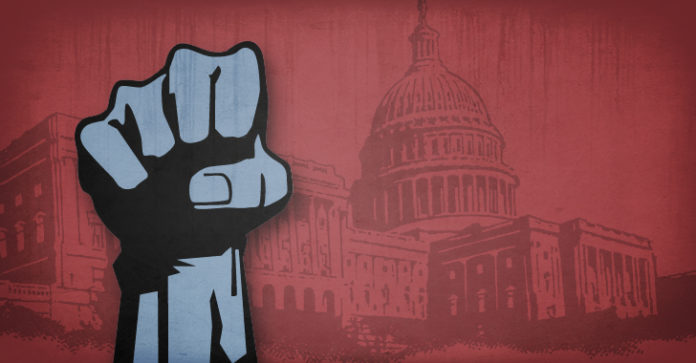 Written by: Remington Alessi at theantimedia.org

In the time since Frederick Douglass said that “Power concedes nothing without a demand,” over a century and a half have vindicated him in his declaration that “It never has, and it never will.” This is because, unfortunately, despite the best propaganda money can buy, the United States historically does not do the right thing unless people in charge are, quite literally, forced to do so.

It was only after strong backlash that the US backed off of the Indian Termination policy of the mid twentieth century. Woolworth’s department stores did not desegregate until economic pressure forced their hand, though the corporation still kept some stores segregated for years following the famous Greensboro protests. Not only is the Unites States at fault, direct action in London this past summer forced businesses to remove inhumane ‘anti-homeless spikes’.

It’s no secret that the economy affects everyone. This entire country grades its own performance on economics. Stock performance, interest rates, and GDP trump measures of academic success, housing access, and life expectancy. If one judges national priorities by the amount of concern, public officials direct at these metrics.

A former life as a bill collector taught me the importance of leverage. A man with a past due credit card might never want to pay off his credit card debt, but might quickly change his mind out of fear that his spouse might find out how he spent his money in Vegas. Just a little bit of information can completely change the balance of power. Knowing now that (a) the state will not do what is morally right unless it is forced to do so and (b) the economy is a valuable pressure point, we can leverage our position so as to be negotiating from a position of power. This country’s history of consistently responding to demands for justice is to respond with violence or the threat of violence means there is a weakness.

Scheduling protests, especially without coordinating with police draws down police resources, and can be expected to cost municipal governments a great deal of money. Police resources, including cell phone signal interception technology, can get expensive, and that keeps city officials from spending money on pet projects like corporate giveaways. This, in turn, can cost corporate money, above and beyond any losses incurred by projects like occupying a shopping mall, marching to the county courthouse, or even just walking around in the rain and making an army of butt hurt police chase you around. No matter how many or how few people appear at a protest, you cost money to deal with and the issue you’re trying to push becomes the squeaky wheel that gets the grease, as long as you are even perceived as a threat. As an old boss of mine often said while sipping on his beer, “fake it ‘til you make it.”

Either way, you win. You just have to be willing to get up and make the difference you always wanted to make.