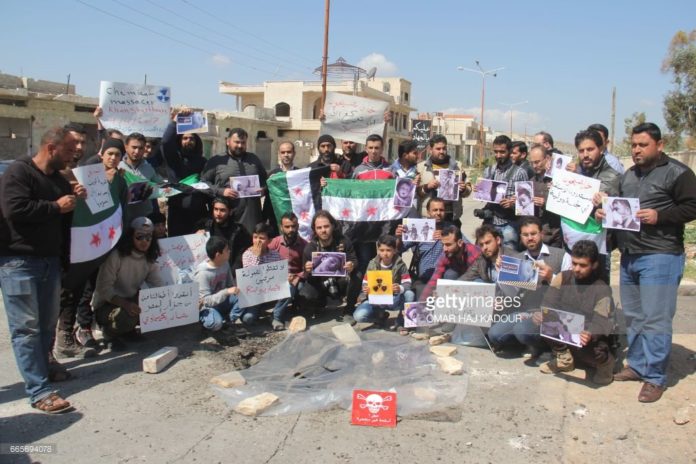 Another reputable source has suggested that the April 4th chemical attack in Syria that prompted a counter missile attack from the U.S., was most likely staged. Theodore Postol, a professor emeritus at the Massachusetts Institute of Technology (MIT) and former scientific advisor at the Department of Defense (DoD), issued three reports in response to the White House’s findings, according to a report from IBT.

Postol has concluded that the U.S. government’s official account of events provided no “concrete” proof that Assad was responsible. Furthermore, he believes the attack was more likely perpetrated by players on the ground. He states:

“I have reviewed the [White House’s] document carefully, and I believe it can be shown, without doubt, that the document does not provide any evidence whatsoever that the US government has concrete knowledge that the government of Syria was the source of the chemical attack in Khan Sheikhoun, Syria at roughly 6am to 7am on 4 April, 2017.

“In fact, a main piece of evidence that is cited in the document point to an attack that was executed by individuals on the ground, not from an aircraft, on the morning of 4 April.

In the following photo, Postol points out that the canister appears to have been attached to an explosive charge that was detonated. Its appearance was not consistent with damage from an aerial explosion:

“The explosive acted on the pipe as a blunt crushing mallet. It drove the pipe into the ground while at the same time creating the crater.

“Since the pipe was filled with sarin, which is an incompressible fluid, as the pipe was flattened, the sarin acted on the walls and ends of the pipe causing a crack along the length of the pipe and also the failure of the cap on the back end.”

This isn’t the first time Postol has pointed out inconsistencies with US intelligence. IBT’s report states that “following the 2013 chemical weapons attack in eastern Ghouta, Postol again said the evidence did not suggest Assad was responsible – a finding that was later corroborated by the United Nations.”

“No competent analyst would miss the fact that the alleged sarin canister was forcefully crushed from above, rather than exploded by a munition within it.

“All of these highly amateurish mistakes indicate that this White House report, like the earlier Obama White House Report [from Ghouta in 2013], was not properly vetted by the intelligence community as claimed.

“And if those analysts were properly consulted about the claims in the White House document they would have not approved the document going forward.”

This article (Yet Another Reputable Source Claims Chemical Attack in Syria was Staged) is a free and open source. You have permission to republish this article under a Creative Commons license with attribution to the author and AnonHQ.com.