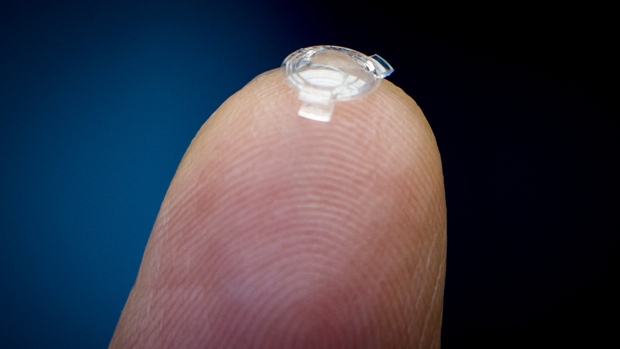 Dr. Garth Webb, an optometrist in British Columbia, has invented the Ocumetics Bionic Lens, which would give patients perfect vision – in fact 60/20 eyesight, three times better than 20/20 – and allow them to see an object clearly from a distance of 30 feet. He also claims his surgically implanted lenses can prevent cataracts from forming because they replace the rotted human lens.

Webb told CBC that people who have the specialized lenses surgically inserted would never get cataracts because their natural lenses, which decay over time, would have been replaced. The painless procedure, identical to cataract surgery, would take about eight minutes and a patient’s sight would be immediately corrected and they can do away with contact lenses and glasses. Webb has spent the last eight years and about $3 million researching and developing the Bionic Lens, getting international patents and securing a biomedical manufacturing facility in Delta, B.C.

Webb showed off his bionic lens to 14 top ophthalmologists in mid-April during an annual conference dedicated to cataracts and refractive surgery. He said the surgeons were impressed, and some will assist in future clinical trials.

Dr. Vincent DeLuise, an ophthalmologist who teaches at Yale University and at Weill Cornell Medical College in New York, says, “There’s a lot of excitement about the Bionic Lens from very experienced surgeons who perhaps had some cynicism about this because they’ve seen things not work in the past. They think that this might actually work and they’re eager enough that they all wish to be on the medical advisory board to help him on his journey. I think this device is going to bring us closer to the holy grail of excellent vision at all ranges — distant, intermediate and near.”

According to Webb, pending clinical trials on animals and then blind human eyes, the Bionic Lens could be available in Canada and elsewhere in about two years, depending on regulatory processes in various countries. But it will only be an option for people over 25 since eye structures aren’t fully formed until that age.