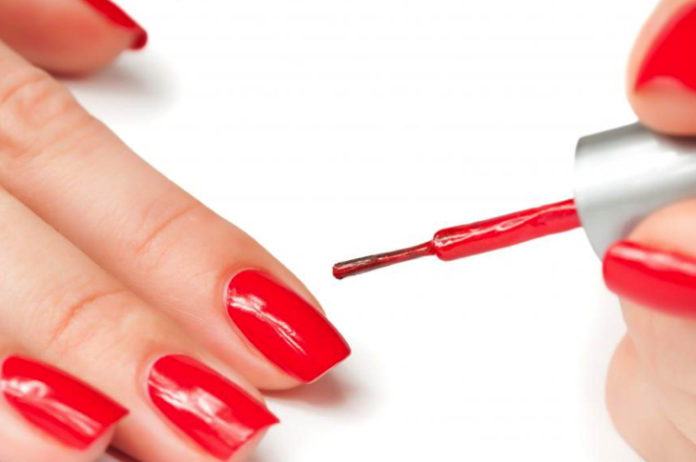 Nail polish is surprisingly horrible for you.

While it’s not surprising that nail polish is incredibly bad for people, it’s not something that many people have thought carefully about because the nail bed is considered a hardy place to keep prettily-colored chemicals on our body that won’t sink into our systems. This kind of thinking, of course, is wrong.

In recent studies to determine just how damaging nail polish can be for people, researchers were shocked to discover that most nail polishes from popular brands had a terrible effect on human bodies after being applied to nails.

Perhaps the biggest threat is the triphenyl phosphate, which is known to disrupt a human’s endocrine system, or the system that regulates hormones. While older women might not worry too much about irregular hormones unless they are trying to get pregnant, this could have unforeseen health consequences for young girls going through puberty that use nail polish, whose hormones are already influx, but extremely important. This chemical has also been known to be a neurotoxin, reproductive toxin, and a skin irritant and allergen.

“There is growing evidence suggesting that TPHP may affect hormone regulation, metabolism, reproduction, and development,” said the lead author of a recent study, Dr. Heather Stapleton.

The recently published study tested the toxin levels of 24 women whose nails had been painted 10 hours prior and 100% of the women showed signs of toxins present in their body. In a follow-up study to determine how many nail polishes contained the worst chemical, triphenyl phosphate, 8 out of the 10 contained the toxin, but only 6 of those 8 listed it on their product label. This means that you would have to do your research before going to the store if you wanted to buy a non-toxic nail polish. Some equally damaging chemicals found in nail polish are formaldehyde, toluene, and dibutyl phthalate. Formaldehyde is known as a human carcinogen, which means that it is toxic when inhaled, and contributes to the signature strong nail polish smell. Consistent inhalation has been linked to leukemia and the development of tumors.

Toluene is used to help polish adhere to the nail and create a smooth finish and is also a carcinogen. Inhaling too much can lead to dizziness, nausea, and headaches in the short-term, but in the long-term it can cause damage to the nervous system and cognitive functioning. When pregnant women inhale it, it can lead to birth defects, and nursing moms should stay away as well because some studies found the chemical to be present in breastmilk after inhalation.

Dibutyl phthalate is often used as an alternative for triphenyl phosphate, but that doesn’t make it any safer. It essentially has the same health risks as the aforementioned toxin. It can also irritate the eyes and lungs.

Finding non-toxic nail polishes that you feel safe when using is not difficult and can actually make you feel better about being health and toxic-conscious. Although you might not find some non-toxic brands at your local drugstore, you can shop online for some toxin-free options and even request that your store start carrying some of the brands to promote a healthier lifestyle.