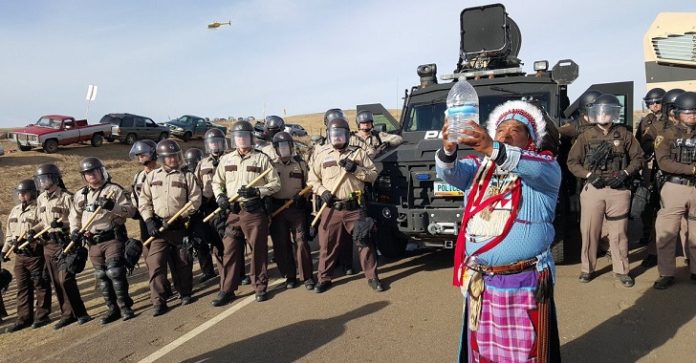 North Dakota — The struggle to stop the Dakota Access Pipeline has been mired in police brutality and militarization. In fact, many have likened the atmosphere in Standing Rock, North Dakota, to a war zone.

The corporate media initially refused to cover the Dakota Access Pipeline protests, though the ongoing story’s virality on social media eventually forced it into the mainstream. Even now that the #NoDAPL movement has developed into a national political narrative, the media continues to whitewash the severity of the crackdown against the Native American protesters, who call themselves “water protectors.”

Below are 10 images I have come across (while closely following the Dakota Access Pipeline protests for Anti-Media) that narrate the struggle at Standing Rock: A young Native American girl has a message for President Obama

The initial crackdown at the Standing Rock camp shortly after the activation of the North Dakota National Guard. A woman is violently arrested by militarized law enforcement This article (10 Images That Perfectly Illustrate the Struggle Against the Dakota Access Pipeline) is free and open source. You have permission to republish this article under a Creative Commons license with attribution to Nick Bernabe and theAntiMedia.org.