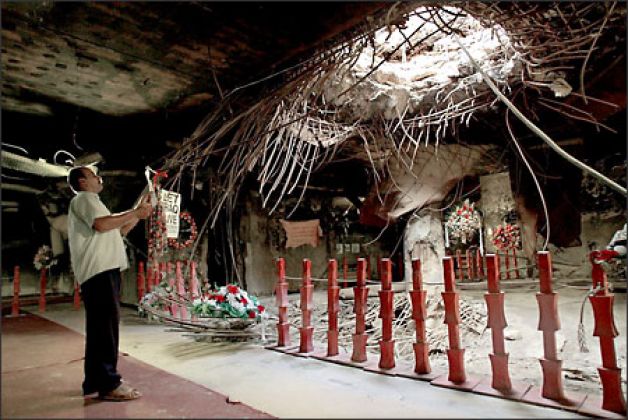 In the wake of the tragic war crime that had been committed against an Afghan hospital being run by Doctors Without Borders, it is perhaps as good a time as any to reflect on the many other such atrocities that had been committed against other civilian targets and had gone largely unnoticed; a footnote in some newspaper, about some “accident” involving a US “Predator” or “Reaper” drone (yeah, I’m sure those names were designed to inspire Afghan and Iraqi civilians. To flee in terror, that is)

Think about it, why do YOU care about the Doctors Without Borders bombing? Perhaps, it’s because DWB exudes credibility- more so than even the US corporate media is able to cover for. Perhaps, its because of the ironic timing, just a day after accusing Russia of killing civilians.

Regardless, the fact is that US strikes against civilian infrastructure and against civilians themselves are hardly uncommon, despite the lack of interest these things seem to garner most times. Check out a few of the worst ones since good ole’ Bush Senior bombed Iraq:

I’m not kidding. They ACTUALLY bombed a factory that produced the stuff starving Iraqi babies drank. Operation Desert Storm was “intended” to push the Iraqi forces out of Kuwait.

On the seventh day of Christmas my true love gave to meeee: One bomb on the baby formula factory! At the time, Bush senior accused the Iraqis of producing “biological weapons” with the factory. Iraq, however, stated that the factory really was just there to make biological FOODS of MASS NOURISHMENT.

Colin “Nukes In Iraq Yellow Cake Uranium” Powell would then say that “It is not an infant formula factory. It was a biological weapons facility — of that we are sure.”  He proved to be such a war-mongering suck-up that he was passed down as a family heirloom to Bush junior.

When CNN’s Peter Arnett reported a half-truth, that “whatever else it did, it did produce infant formula,” he was attacked by US politicians.  Sadly, the entire US media got behind the “baby-formula=Bio-weapons bandwagon”. Now, where have we seen THAT before hmm?

Later, the CIA’s OWN INVESTIGATION (still don’t trust em) proved that the site had been bombed “in the mistaken belief that it was a key BW [Biological Weapon] facility.”

To this day the lie gets perpetuated, and George junior got to cite his father’s mistaken bombing of a BABY formula factory as an example of Iraqi “deceit”.

The reporter who had at least attempted to tell a half-truth was “remembered” by the Newseum according to the New York Times thus:

or even Peter Arnett’s 1991 broadcast on CNN that seemingly swallowed the Saddam Hussein government’s account of the United States having bombed a “baby-milk plant.”

When liars become “heroes” and heroes, liars…. this is why the mainstream media has its “journalists” so deeply under its thumb- who wants to become the next Peter Arnett?

“we saw the charred and mutilated remains. … They were piled onto the back of a truck; many were barely recognizable as human.”

Lt. General Thomas Kelly had this to say:

“We are chagrined if [civilian] people were hurt, but the only information we have about people being hurt is coming out of the controlled press in Baghdad.”

Apparently the “controlled press of Baghdad” is more reliable than the controlled press of America, who were quick to mouth the claims of  it being “an active command-and-control structure” with military trucks and limousines “observed” (imagined) at the location.

The US would eventually admit that they KNEW that the building was used as a civil-defense shelter, a building afforded “protected status” and Human Rights Watch stated that the US had to give prior warning before changing the status of the building…“The United States’ failure to give such a warning before proceeding with the disastrous attack on the Ameriyya shelter was a serious violation of the laws of war… It is now well established, through interviews with neighborhood residents, that the Ameriyya structure was plainly marked as a public shelter and was used throughout the air war by large numbers of civilians.“

Just to prove that US hatred of all things civilian supersedes administrations, Clinton was “convinced” that a factory that produced Weapons of Mass Healing was in fact produced Chemical WMDs. You starting to see the pattern here?

Clinton never coughed up any plausible evidence for bombing the factory, and let’s face it, US presidents never seem to need to prove ANYTHING.

Jonathon Belke of the Near East Foundation stated that the plant produced 90% of Sudan’s major pharmaceutical products.

The result?  “Tens of thousands of people — many of them children — have suffered and died from malaria, tuberculosis, and other treatable diseases.”

Sudan has asked the UN to investigate this war crime, to no avail. (Hint: US gets to veto anything investigating its atrocities. War crimes are only for the little people, it seems).

During the Kosovo war, the US fired remote-guided missiles at a train near Grdelica. 14 civilians were killed. There was no reason to explain the murder of 14 people, so they just called it an “unfortunate accident” and everyone ran with that.

This is despite the fact that the pilot had hit the train twice with missiles:

The pilot fired a second missile in an attempt to hit the opposite end of the bridge, Clark said. But by “an uncanny accident,” the train had slid forward, moved across the bridge and ended up in the missile’s path.

Uncanny how you can hit the same train TWICE by “accident”.

NATO released footage “proving” that the train was moving too darned fast and that it got in the way of the missile. German Newspaper  Frankfurter Rundschau, however found that the footage was in fact sped up to thrice the original speed. The US would of course claim that this was accidental. Amazing how many uncanny accidents seem to keep happening to accidentally distort the truth.

Clinton came clean this time, it was no “accident”.  In his own words:

“Our military leaders at NATO believe … that the Serb television is an essential instrument of Mr. Milosevic’s command and control. … It is not, in a conventional sense, therefore, a media outlet. That was a decision they made, and I did not reverse it.”

Amnesty International asserted that it was “a deliberate attack on a civilian object and as such constitutes a war crime.” So, how many humanitarian organisations have accused the US of War Crimes so far? I lost count.

YET AGAIN in the Kosovo War, the US had this time decided to bomb the Chinese.

Defense Secretary William Cohen:  “One of our planes attacked the wrong target because the bombing instructions were based on an outdated map.”

The Observer, UK-based newspaper however asserted that the US had purposely bombed the Chinese embassy, “after discovering it was being used to transmit Yugoslav army communications.”

The Observer cited “a source in the U.S. National Imagery and Mapping Agency” calling Cohen’s statement “a damned lie.”

The New York Times came to Clinton’s rescue with its own “investigation”, and found “no evidence that the bombing of the embassy had been a deliberate act.”

Wonder how the US would react if the Chinese had “accidentally” bombed THEIR embassy?

This next one’s gotta be a war crime.

Bush junior’s turn to f*** sh** up. The US “accidentally” bombed a complex which housed the International Comittee of the Red Cross in Kabul. The US then asked the Red Cross for the location of all its installations in the country, so no such “accidents” would happen in future.

They then proceeded to bomb the same complex AGAIN.  Tons of food and supplies meant for Afghan refugees went up in flames.

“Whoever is responsible will have to come to Geneva for a formal explanation,” said a Red Cross spokesperson. “Firing, shooting, bombing, a warehouse clearly marked with the Red Cross emblem is a very serious incident. … Now we’ve got 55,000 people without that food or blankets, with nothing at all.”

Fool me once, shame on — shame on you. Fool me — you can’t get fooled again.

Just a few short weeks after the bombings of the Red Cross building, the US proceeded to bomb yet another target that had been repeatedly defined to be the Kabul bureau of Al Jazeera. Al Jazeera, NOT Al Qaeda, damn it! The BBC building neighboring it was also damaged.

It seems you’re safer NOT telling the US exactly where you are; they might not be able to find you and bomb you that way.

It seems Bush really had a vandetta against Al Jazeera, because it bombed the Baghdad office of Al Jazeera soon after invading Iraq too!

According to The Mirror, Bush was pissed off by Al Jazeera’s coverage of Fallujah, and Bush had even wanted to bomb it in its Qatari headquarters. Tony Blair apparently argued him out of committing an obvious war crime. Later Tony would claim that The Mirror’s statement was “conspiracy theory” and promptly threatened them with the Official Secrets Act… Proving that this was just a conspiracy theory, and not a secret…

A heroic civil servant was sent to jail for leaking the information. CLEARLY Bush was NOT a psychopathic maniac… naw…

The day that they bombed Al Jazeera in Baghdad, they decided that ALL journalists were on the chopping block and fired a tank shell into the 15th floor of the Palestine Hotel; most of the foreign journalists happened to be staying there, and two cameramen were killed.

The Committee to Protect Journalists conducted an investigation which concluded that the attack, “while not deliberate, was avoidable.”

Seriously, they bomb TWO journalistic targets in ONE day and you think it was accidental? Clearly you’re not very good at protecting journalists…

This was an account of only the times the US had bombed civilian infrastructure, and only ten of the worst of these. Many other atrocities such as the shooting down of an Iranian civilian airliner and use of depleted Uranium were not covered by this article.

Sources: The Intercept, The NYT, Good Reads, The Guardian

This Article (War Crimes… War Crimes EVERYWHERE: 10 Times The US Has Bombed Civilian Infrastructure) is free and open source. You have permission to republish this article under a Creative Commons license with attribution to the author(CoNN) and AnonHQ.com.