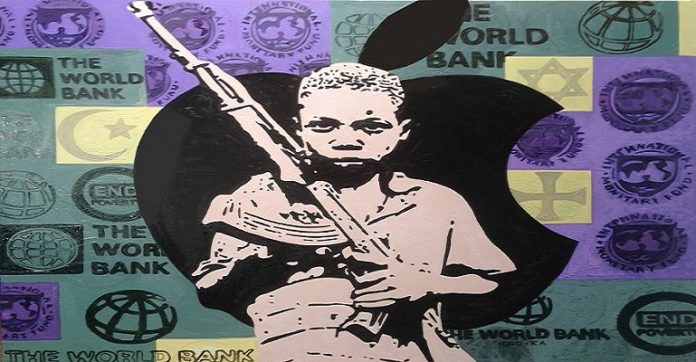 A study by Oxfam and Urgewald proves that the IMF (International Monetary Fund) & World Bank, through its International Finance Corporation, finances private financial investors whose projects kill many thousands of people for their livelihood.

Anyone who enters the headquarters of the World Bank Group in Washington, near the White House, can not overlook the fact that “our dream is a world free from poverty” is written in large letters above the reception. But the promise of the fight against poverty comes in the practice of the world’s largest development aid organization again and again to fight against the poor. This is confirmed once again by a study published by ten development and human rights organizations, including Oxfam and the German initiative Urgewald.

Who is controlling the IMF & The Worldbank?

The answer does require some research & digging. Just like IKEA, AMAZON, GOOGLE etc. who (successfully) try to avoid paying taxes by creating a untraceable mesh of dozens if not hundreds of sub-businesses all over the world sending money off-shore back and forth. And if you think that banks are more transparent, then you are simply naive.

So if you can count two and two together, you know who controls the Federal Reserve Bank of America, the IMF and the World Bank.

The investigation titled “The Suffering of Others” documents how thousands, in violation of their human rights, have been victims of projects using the money of the International Finance Corporation (IFC). This is the branch of the World Bank Group, which finances non-governmental projects, but private companies with loans and equity investments. At around nine billion dollars a year, about a quarter of all World Bank loans go through the IFC. But around two-thirds of this sum is not invested directly by the IFC managers in development projects. Instead, they lend to private banks or buy shares in financial companies, which in turn participate in investments of all kinds. And that’s exactly the problem. For the World Bankers for the most part renounce any control as to whether the companies subsidized use the money for the benefit of the population.

One case of many is the construction of a 1400-megawatt coal-fired power plant in the Indian state of Odisha.

This funds the “Indian Infrastructure Fund”, in which the IFC has been involved since 2008 with $ 100 million. Nobody in Washington, for example, was told that the subsidized power company provided the necessary 500 hectares of land with brute force. Under duress almost 1300 families had to cede their fertile fields far below market value at bargain prices. About 5,000 people lost their lives. When they protested, there were clashes with the police, which then invaded the villages. Until today, there is a climate of fear in the region, say those affected who are still waiting for compensation.

Even more questionable is the IFC’s involvement in Vietnamese financial investor Dragon Capital, which has received nearly $ 27 million in world bank money since 2002. The company holds large stakes in an agricultural company called Hoàng Anh Gia Lai, which operates sugar cane and oil palm plantations on more than 50,000 hectares in neighboring Cambodia and Laos. For this, the company has taken possession of land, which has been cultivating the local population for their diet since time immemorial. In the Cambodian province of Ratanakiri alone, 18 villages with about 15,000 inhabitants are said to be affected, the human rights activists said. As a result, nine-tenths of all households are impoverished. Many are barely able to feed, complain those affected.

“Big dark number of questionable projects”However, these and the other cases described became known only as knowledgeable helpers informed the victims of World Bank involvement and helped them file a complaint there. Because the IFC, under the pressure of the critics, has set up the post of a “compliance advisor”, an ombudsman who investigates such complaints, the public is now also being informed. However, as a rule IFC private borrowers do not disclose where they invest IFC money.

One might assume, therefore, a “large number of unclear projects in question”, says Knud Vöcking, who has long been investigating World Bank practice for the environmental and human rights organization Urgewald. The IFC’s clients are required to commit to disclose all their investments, critics say. In addition, these should not only be formally committed to compliance with the social and environmental standards of the IFC, the so-called “safeguards”. Rather, this should also be controlled by independent auditors and their breaches should be sanctioned.