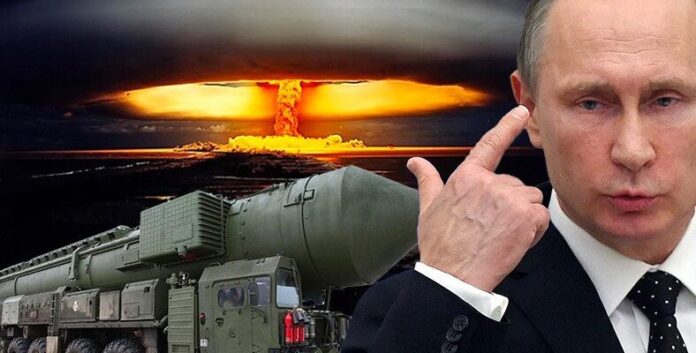 Russia’s invasion of Ukraine has raised the spectre of something considered almost unthinkable until recently: the use of a small nuclear weapon during a conflict in Europe.

AFP looks at the risk that Russian President Vladimir Putin would authorise a so-called “tactical” nuclear strike against a country he has repeatedly claimed forms “one people” with Russia.

Why is there concern?

On February 27, three days after the start of the invasion, Putin ordered his defence chiefs to put Russia’s nuclear forces on high alert in a highly choreographed meeting in front of TV cameras.

Western countries quickly condemned the move, with US Secretary of State Antony Blinken calling it “provocative” and “the height of irresponsibility.”

Most Western analysts believe the rhetoric was designed to deter the United States and its allies from increasing their support for Ukraine beyond existing economic sanctions and weapons supplies.

“Not only is this meant to instill fear in the whole world; it’s also meant to scare anyone from helping in Ukraine,” Beatrice Fihn, who leads the International Campaign to Abolish Nuclear Weapons, told AFP.

President Putin has raised the threat of using nuclear weapons – and his spokesperson Dmitry Peskov refused to rule out their use, in an interview with me tonight. pic.twitter.com/uxQqncLGYN

How big is Russia’s nuclear arsenal?

Russia has the largest number of nuclear warheads of any country, according to the SIPRI peace research institute in Stockholm, which puts the figure at 6,255.

Experts say the risk in Ukraine is not the deployment of a giant “strategic” weapon, which pose a threat to the entire planet.

Instead, Putin might be tempted to use a “tactical” weapon, with a smaller warhead that causes localised devastation but without threatening life across Europe.

These weapons come in various sizes, and their impact depends on whether they explode at ground level or above the Earth’s surface.

US President Joe Biden also claimed this week that Moscow was considering the use of chemical and biological weapons in Ukraine.

“Chemical weapons would not change the course of the war. A tactical nuclear weapon that reduces a Ukrainian city to rubble? Yes,” Mathieu Boulegue, an analyst at the London-based Chatham House, told AFP.

Yes, but Ukraine and Western capitals fear that Putin finds himself cornered, sustaining major battlefield losses and economic problems at home that put his political survival in doubt.

A tactical nuclear strike would be intended to break the resistance of Ukrainian forces and force President Volodymyr Zelensky to surrender.

Pavel Luzin, an expert at the Russia-focused think-tank Riddle, said the first step would see a tactical weapon used over the sea or an uninhabited area, as an act of intimidation.

“After that, if the adversary still wants to fight, it may be used against the adversary in the direct way,” he said — meaning over a city.

Christopher Chivvis, who served as the top US intelligence official for Europe from 2018 to 2021, said recently that there were “only two paths” to end the war.

“One, continued escalation, potentially across the nuclear threshold; the other, a bitter peace imposed on a defeated Ukraine,” he wrote in The Guardian newspaper.

What does the Kremlin say?

On Tuesday, Putin’s spokesman Dmitry Peskov was asked three times by CNN interviewer Christiane Amanpour to rule out the use of nuclear weapons.

He pointed instead to Russia’s nuclear doctrine published in 2020, in which “you can read all the reasons for nuclear arms to be used.”

“If it is as an existential threat for our country, then it can be used in accordance with our concept,” Peskov said.

Recent claims from the Kremlin about Ukraine developing chemical, biological or even nuclear weapons — dismissed as disinformation by Western officials — are a cause for concern.

“The use of a weapon of mass destruction against Russia would be a doctrinal justification for responding with a nuclear weapon,” said Kristin Ven Bruusgaard, an expert on Russia’s nuclear doctrine at the University of Oslo.

Is this just alarmism?

Possibly. William Alberque, an expert on arms control at the International Institute for Strategic Studies, a British think-tank, told AFP that he doubted Putin would deploy tactical nuclear arms.

“The political cost of the use of nuclear weapons would be outrageous. He would lose the little support he still has. Indians would have to pull out. The Chinese as well,” he said.

Ven Bruusgaard suggested that Putin’s concern about his own place in history might deter him.

He would also need approval to launch one from either Defence Minister Sergei Shoigu or Chief of the General Staff Valery Gerasimov.

“The military repercussions would be unpredictable to say the least and potentially extremely dangerous for Russia,” she said, since NATO or the United States might feel obliged to enter the conflict directly.

“That’s the exact scenario that Russia is trying to avoid,” she said.