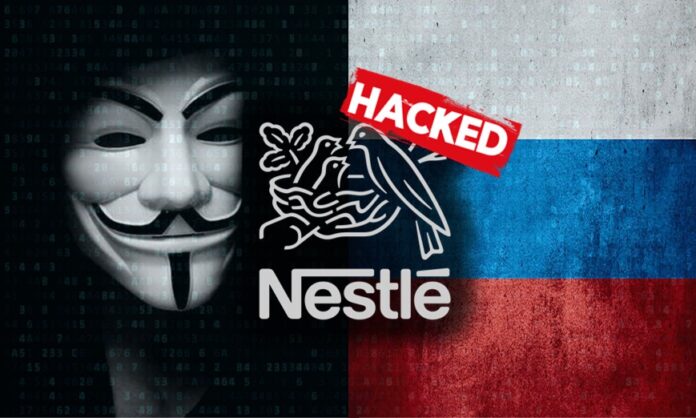 Nestlé denies being hacked by Anonymous and claims to have accidentally leaked data itself – but it will stop selling Kit Kats and Nesquik to Russians.

UPDATE: Only a sample of data has been published with more than 50K Nestlé business customers. Leak: https://gofile.io/d/kyFj0A (No Virus detected) Currently the weight is 10GB in SQL Format.

The war in Ukraine is also creating clear fronts on the web: Because many companies continue to do business in Russia despite the attacks, the hacker collective Anonymous warned of retaliation. The most prominent example backfired, but was not without effect.

When it comes to the war in Ukraine, most people in Europe do not find it difficult to choose sides. There is a corresponding lack of understanding that some Western companies are doing business as usual in Russia. The hackers from Anonymous didn’t want to let that pass. And set a clear deadline.

The companies had 48 hours to withdraw from Russia, otherwise they would face consequences, Anonymous announced late Sunday evening. They left no doubt as to whom the threat was specifically directed at: a graphic showed the logos of all the companies that were supposed to feel targeted. These included fast food chains such as Burger King and Dunkin Donuts, the Marriott hotel chain, but also digital service providers such as Cloudflare or the oil company Chevron. And also the food giant Nestlé.

At Nestlé, the hackers then apparently wanted to show that they were serious about their threats. “The hacker group Anonymous has published 10 gigabytes of data from the Swiss company Nestlé. This is in retaliation for the company’s continued business in Russia,” a large Anonymous account on Twitter said yesterday. According to the account, the data includes emails, passwords and data on 50,000 customers.

But the matter is probably not as clear as Anonymous makes it out to be. According to Nestlé, the attack did not take place at all. The alleged hack has no basis in fact, the company told the Handelszeitung. An internal investigation had not been able to prove any signs of intrusion into the system. The alleged loot was also not loot at all: it was test data that had already been inadvertently posted online for public viewing in February, the company said. In the opinion of IT security, therefore, no further measures were necessary, Nestlé explained. Nestlé reacts: No Kitkat in Russia

Nestlé was targeted by the hackers because Ukrainian President Volodymyr Selenskyj had explicitly criticized the major corporation for continuing to do business in Russia. This was not without effect: The company, which was also criticized for numerous business practices before the war, announced on Wednesday that it would withdraw numerous brands such as Kitkat and Nesquik from the Russian market. The group said it only wanted to offer essential products such as baby food and medical products there. The Group rejected the accusation that it was indirectly financing the war with its taxes in the country: Because no profits can be expected in Russia in the near future, no taxes would have to be paid there, the statement said. If profits were made, they would be donated.

Anonymous, meanwhile, has already embarked on its next action: it has hijacked thousands of printers in Russia, the collective explained. They used them to print out instructions on how to use free media via the anonymization service TOR in huge numbers of Russian households.

In addition, there was a handicraft sheet that would not please Russian President Vladimir Putin very much: The four pigs depicted can be reassembled with three creases – and then show his face.