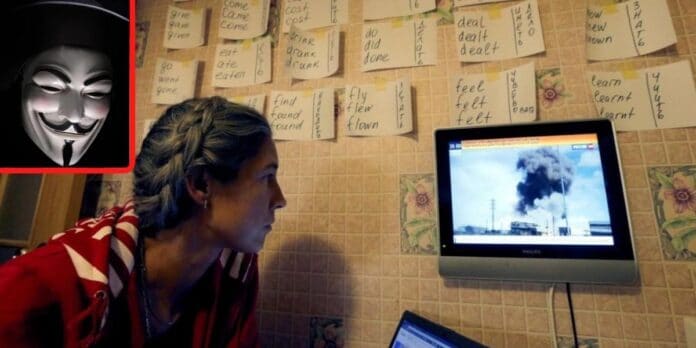 Several Russian television channels have been hacked and had their programming substituted with coverage of the war in Ukraine by independent broadcasters Current Time and Dozhd TV, outlets blocked in Russia by the authorities.

Twitter accounts historically associated with Anonymous, the amorphous online activist community that first grabbed global attention about a decade ago, claimed it was behind the hacker attack.

Among the television channels impacted were Russian streaming services Wink and Ivi, a service similar to Netflix, and live broadcasts at the TV channels Rossia-24, Channel One, and Moscow 24, the hackers’ group said on Twitter.

“We are involved in the biggest Anonymous op ever seen. That being said, we are worried that some governments will indeed see us as a threat and create some scenario to make us look bad (false flag). We only want peace, not war,” the group said on Twitter.

The streaming platforms and television channels are now back broadcasting without the hackers’ interference.

It is not the first hacking attack on Russian media outlets during Moscow’s unprovoked invasion of Ukraine.

Before that, on February 26, the official website of the Kremlin, the office of Russian President Vladimir Putin (Kremlin.ru), was down following reports of denial-of-service attacks on various other Russian government and state media websites.

Anonymous claimed it was behind that hacking attack as well. Russian authorities have intensified pressure on media outlets, threatening them for their reporting about the invasion on topics such as the heavy resistance being put up by Ukrainian forces despite Russia’s overwhelming military power.

Russia’s media regulator, Roskomnadzor, has ordered media to only publish information provided by official sources. It has also forbidden media organizations from describing Russia’s unprovoked actions as an invasion or a war, instead insisting they are called “special military operations.”

Radio Free Europe/Radio Liberty suspended its operations in Russia on March 5 after local tax authorities initiated bankruptcy proceedings against its Russian entity right after Russian President Vladimir Putin signed a new law that allows for prison sentences of up to 15 years for people who distribute “false news” about the Russian Army..

The Agentstvo Telegram channel said on March 7 that, in all, at least 150 journalists have fled Russia since the start of Moscow’s full-scale military attack on Ukraine on February 24.