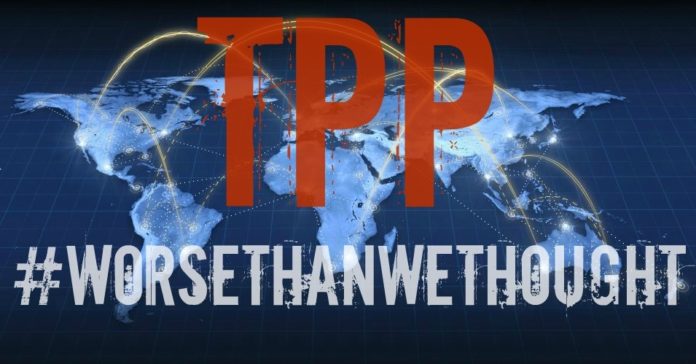 I stumbled across it. I merely stumbled across the information while writing another article about Julian Assange. I’m not talking about the UN essentially admitting that Assange is a good guy hard done by – only for the world to ignore it – I’m talking about the Trans-Pacific Partnership (TPP). Substitute the word partnership for division and you may see some relevance. Lost yet?

The fact is, for years now, the TPP has been veiled under a blanket of closed-door meetings that most Congressmen weren’t privy to. Around 600 of the largest corporations however, took pen and paper into the secret chambers and notated the chapters ruling over the global trade agreement; while politicians were forced to remove the toilet paper clinging to their boot.

The TPP encompasses 40 percent of the world’s GDP via 12 Pacific Rim countries. Pretty big, huh? Impressive even. Add to it, the 6 years or so of secrecy, and you have a full blown conspiracy riddled with words like government agenda, new world order, and elitist… like it, or not.

Assange, while holed up in the Ecuadorean embassy, held a few interviews here and there voicing his opinion on all the current acronyms floating around the Pacific Rim, the TPP included. I interviewed OceanaGold Mining (for another article) and mentioned it, TPP and TTIP were, and have always been, unapologetically ignored.

Which is why I’m so astounded. The chapters of the TPP have finally been released – done so on the 26th Jan, 2016. We’ve waited years – literally years – for its unveiling. Mainstream and alt media have covered its body from top to toe. WikiLeaks had first dibs a while back, and revealed the first sneak peak of the horror read when information dropped into their laps. Can anyone say the word extradition? It’s up there with Embassy and Ecuador. But I digress.

I stumbled upon it by clicking on a link that was once closed to the public. The chapters, all 30 of them have been published. But what stinks is the zero media coverage it received until this week.

Draw your own conclusions from that.

This Article (When did THAT happen? The TPP Chapters Released!) is a free and open source. You have permission to republish this article under a Creative Commons license with attribution to the author AnonWatcher and AnonHQ.com.