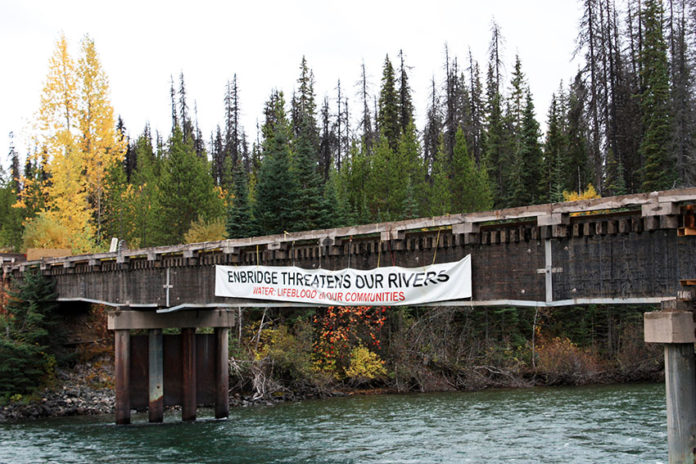 Challenging moral values deeply embedded within those of Western culture is one of the many steps that volunteers are discovering on their journey with the Unist’ot’en. One of the First Nation tribes, the Unist’ot’en are on the battlefront, trying to protect what is rightfully theirs against big companies Chevron and TransCanada. Tony Manno from YES! Magazine News went out to British Columbia to the traditional lands of Unist’ot’en territory. As a visitor to the area you would reach a bridge checkpoint and asked a series of questions to deem your intentions of visiting the next to pristine landscape where water is still drinkable straight from the salmon filled rivers. Manno documents the ongoing stance taken against the government and industry who are trying to complete a natural gas pipeline through the area.

Chevron’s almost 300-mile Pacific Trail, and 400-mile Coastal GasLink from TransCanada are amongst the constructions the First Nation are literally standing against. The networks of pipeline for crude oil and fracked natural gas are destined for Asian markets, according to Manno. The united front comes from volunteers of First Nations to those who have no background, offering their support to expand the stand against these large companies. The volunteers occupy the land with barricades at a checkpoint, while completing set tasks. Some will keep check at satellite camps to monitor any attempts of helicopter activity – the companies trying to enter the land. Others are assigned to cooking the meals for the day.

It’s a network founded in solidarity; to protect the environment around them. They don’t want to wait for their lands to become infertile before they take a stand. Spending time away from their families to preserve a land for generations to come, is at a small cost. Only when the snows come is it safe for the volunteers to leave and touch base with their communities’ and family, though some still remain on site.

It makes sense to take a lesson from those whose ancestors were here first.

*All images sourced at http://reports.yesmagazine.org/unsurrendered/.

This article (Chevron and TransCanada Oil/Gas Lines halted as First Nation Protects Generation’s Land) is a free and open source. You have permission to republish this article under a Creative Commons license with attribution to the author AnonWatcher and AnonHQ.com.