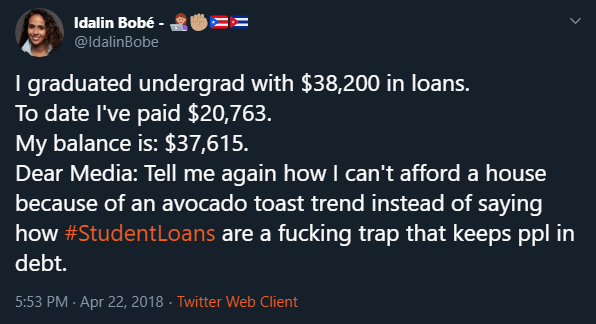 The student debt crisis in the United States has now outpaced the Australian GDP. Standing at around 1.5 trillion dollars, the student debt trap is crippling students for decades.

As recessions loom and inflation rises (it tripled between 2007 and 2018) the debt crisis will only worsen. Although it’s a hot topic that’ll open some debate in the 2020 elections, the student debt crisis needs addressing now.

Here’s what some real former students have to say about the situation.

I graduated from law school 6 years ago with $250,000 of student loan debt. But after years of hard work and tens of thousands of dollars of payments, I can officially say that I now owe $315,000.

I graduated undergrad with $38,200 in loans.
To date I’ve paid $20,763.
My balance is: $37,615.
Dear Media: Tell me again how I can’t afford a house because of an avocado toast trend instead of saying how #StudentLoans are a fucking trap that keeps ppl in debt.

When I was 17 I went to get a Limp Bizkit tattoo and when they wouldn’t let me because I didn’t have a guardian’s approval, I cried and punched a lamp post. 3 months later I was allowed to take on $119,000 in loans to go to art school.

“Young adults are being forced to rely on help from parents to survive due to overwhelming student loan debt and cripplingly low wages” there, fixed your headline https://t.co/ZWHeC3KbrE

This country needs Architects, doctors, lawyers and engineers, but we are punished for success. Our education system is broke. #StudentDebtCrisis

Want to know just how big our #studentdebtcrisis is?

US college grads have $1.56 TRILLION in student debt. The GDP of Australia is $1.4 trillion.

“Telling me I need #college in order to get a well-paying job, only to find out 10 years after graduating that I’ll need three well-paying jobs just to pay back the #studentloan? That seems pretty predatory.” @OGpenn @KQED https://t.co/9hKPL4e3Zq

Nearly 20 years after beginning college, I paid off my #studentloans today.

I was $286,000 in debt when I graduated from fucking art school in NYC 8 years ago. Last week I made the final payment. #studentloans

Since 1987 when adjusting for inflation, the % increase in:

This is student debt crisis in a nutshell.