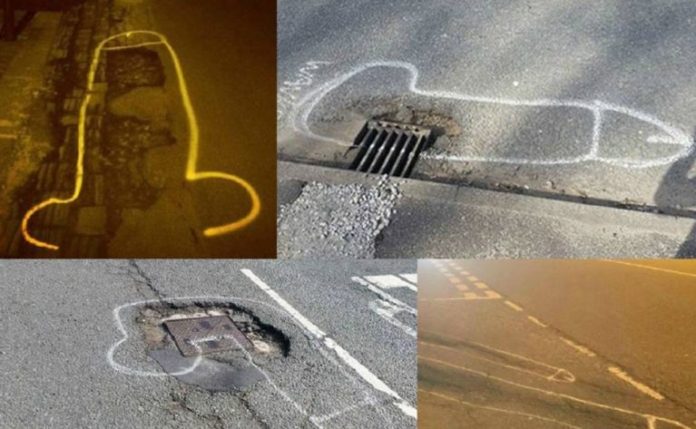 Pot holes that have existed for years are fixed within a matter of days after an anonymous vigilante draws phallic symbols around them.

What’s worse than pot holes on a busy road? Sketches of penises, apparently. An anonymous activist found this out after he drew phallic symbols around pot holes that desperately needed to be fixed and filled.

According to Manchester Evening News (MEN), pot holes are a serious issue in Manchester, England, where a one half-mile stretch of road can have as many as 70 holes. Because pot holes can cause damage to vehicles and their drivers, the vigilante – dubbed “Wanksy” – decided to take matters into his own hands. Reportedly, he got sick and tired of the state of the roads after witnessing one of his friends get into a pothole-related bike accident.

Using industrial-level chalk, the activist draws penises around the potholes. The city can’t ignore this form of visual terrorism, so the potholes usually get fixed within 48 hours. Incredibly, some of the potholes had existed for years, but were fixed within 1 – 2 days after Wanksy went to work on them.

“I wanted to attract attention to the pothole and make it memorable/ Nothing seemed to do this better than a giant comedy phallus.”

Because Wanksy isn’t using spray paint, the phallic symbols should wash off within one to two weeks. In addition, as FastCoDesign points out, the crudeness of the images are only deployed in the interest of public safety.

As a result of this individual’s activism, a number of pot holes have been filled, causing Manchester’s previously pockmarked streets to look a bit better. Not all are happy with the individual’s war on pot holes, but many citizens from around think the method of ensuring pot holes are fixed is ingenious.

On the official Wanksy fanpage, people are asking the activist to take his penis drawing skills overseas.

“We need you in Madison, Wisconsin aka pothole hell.”

And others, such as Helen Heiki Piscoe, just want to express their support. Piscoe commented:

“Just like Van Gough’s water Lilly’s, another masterpiece. Society thanks you Wanksy, please keep up the fight.”

What are your thoughts on this vigilante’s behavior or this method of ensuring pot holes are fixed? Please comment below and share this news!

This article (Anonymous Activist Draws Penises Around Pot Holes, And They’re Fixed Within 48 Hours) is free and open source. You have permission to republish this article under a Creative Commons license with attribution to the author and TrueActivist.com