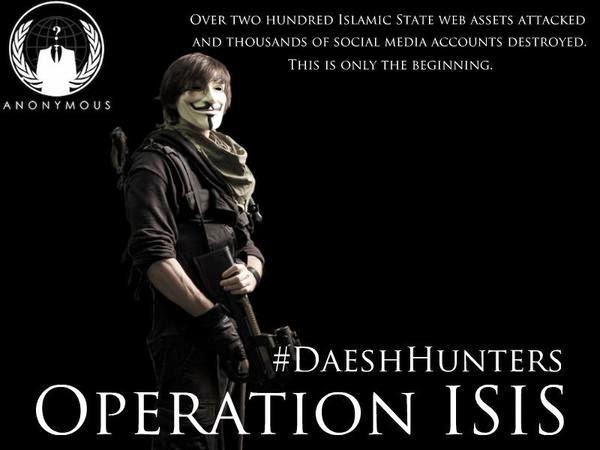 Anonymous has been engaged in Operation ISIS (#OpISIS) for a long time now and have successfully attacked hundreds of websites and taken down thousands of Twitter and Facebook accounts. One group in particular, GhostSec, has contributed a lot to #OpISIS and has issued a warning that any internet users who support or promote ISIS and their campaigns will most likely become the victim of an attack.

Anonymous and GhostSec are currently watching the websites and social media accounts used by ISIS puppets and have sworn to remove them completely from the internet.

Anonymous has published the list of websites that are often used by ISIS puppets along with more details about the ISIS organization.

“All websites listed below are frequently used by the Islamic State through Twitter and other social media platforms for transmission of propaganda, religion, recruitment, communications and intelligence gathering purposes. Next to the URL you will find the company hosting content for that website. Verification can be done by visiting http://check-host.net and entering the website URL. It is our sincerest hope that the media use this as a tool to show the world that the Islamic State is everywhere in some shape or form and that companies are unaware of their customers content or they turn a blind eye for easy profit and choose to accept blood money. CloudFlare is by far the largest offender on this list and they have been made aware of the specified content they are protecting but chose to block us from contacting them rather than addressing the issue. Together we can stop this from spreading and hold these companies accountable for their less than ethical business practices.”

For the full statement, please see the following link: https://ghostbin.com/paste/ce5jz