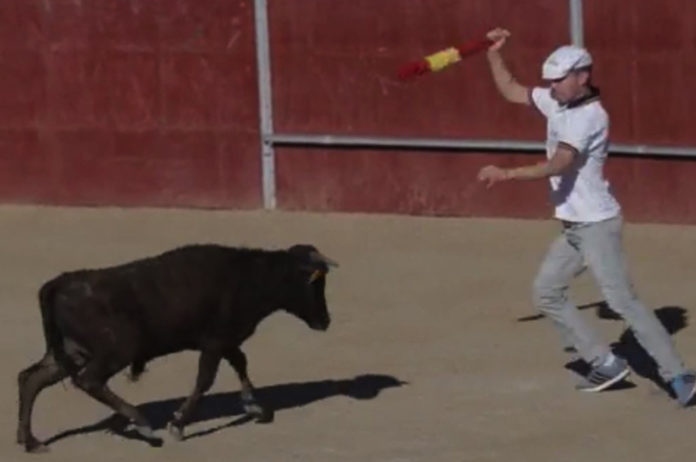 Video footage of a baby cow being tortured to death in an even more horrific version of Spain’s bullfighting events has caused an uproar against the cruel sport.

At first sight, it appears that the images are of the already-horrible bullfights, where adult bulls have swords repeatedly stabbed into them as they fearfully charge at a Spanish matador. The inhumane event ends with the tortured bull being killed with a long, curved sword.

Now imagine this series of cruel tasks being performed on a baby cow, who hasn’t even been weaned off his mother’s milk and whose horns have not yet grown in. The amateur event was part of a festival in Valmojado, outside Madrid.

The video of the baby cow is shocking even Spanish natives who normally sit back and let bullfighting happen. Citizens of Spain are now joining forces with the Animalist Party Against the  Mistreatment of Animals (PACMA), who originally released the video to shed light on the reality of this form of entertainment.

A long history of controversy stemming from bullfighting exists, but little change has come from activists speaking out about how inhumane the practice is. While many Spaniards aren’t in support of the sport, they also don’t formally petition against it, making it still legal in many regions of Spain.

However, images of a grown man stabbing a terrified baby animal to death have finally enraged citizens enough to say that this kind of treatment is disgusting and should no longer be tolerated. One Facebook user from Spain, Fido Miguelon, who is upset about the event said,

“What is worse is all the clapping and people bringing their children up to see this ‘culture festival.’ Culture is reading books, not killing a defenceless animal.”

This isn’t the first time this has occurred, either, as the spectacle has even been named becerrada and specifically signifies a fight with young bulls. The event happened at the height of the country’s summer festival season, when many spectators would be present, because it’s a special occurrence.

The video ends with the baby bull coughing up blood and collapsing. This is what supporters of the sport consider a special event.

Silvia Barquero, president of PACMA, who put the video together, told The Mirror,

“The team that has had to make this video have had their hearts broken while working with these images. Although we are used to facing these kinds of acts, we were completely unable to hold back the tears, we will never forget it.”

The animalist party recently won a record number of seats in the Spanish general election, and their main goal for the past 13 years has been to ban bullfighting. While footage like this is extremely upsetting, the party will continue to fight so that no more bulls and calves have to suffer this way.

This article (Baby Cows Forced To Fight — And Die — In Bullfights) is free and open source. You have permission to republish this article under a Creative Commons license with attribution to the author and TrueActivist.com