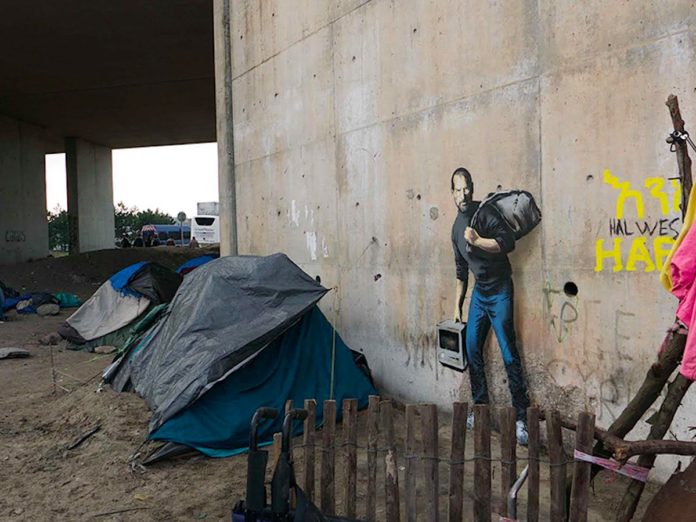 The artwork references the fact that Steve Jobs is the son of a Syrian refugee who fled to America during World War II.

The street artist Banksy is responsible for another daring work of art, this time at the Calais refugee camp in France which is oftentimes called “the Jungle.”

The artwork shows Apple founder Steve Jobs, with a small black bag thrown over his shoulder and an old Macintosh computer in his other hand. This references the fact that Steve Jobs is the son of a Syrian refugee who fled to America during World War II.

Banksy released a statement with the images, saying:

“We’re often led to believe migration is a drain on the country’s resources but Steve Jobs was the son of a Syrian migrant. Apple is the world’s most profitable company, it pays over $7bn (£4.6bn) a year in taxes – and it only exists because they allowed in a young man from Homs.”

Banksy also created a few other pieces in the same area, one of them was a spin off of Theodore Gericault’s Raft of the Medusa, showing a luxury yacht sailing away from drowning people.

In his most recent Steve Jobs piece, Bansky is pointing out that refugees from places like Syria are capable of amazing things. This is presumably in response to the widespread disinformation that refugees are economically worthless, as if that should even hold any bearing on the value of their lives.

Many of the anti-immigration commenters who have been against allowing the refugees to move from their war-torn homes, have claimed that Syrian migrants would be a drain on the economy and would eat up the benefits and welfare that Europeans receive. However, this is not true, many of the migrants are skilled and willing workers who don’t want any handouts, they just want to work and own their own property in place that is relatively peaceful and safe to raise children.

This article (Banksy’s New Piece Shows Steve Jobs As A Syrian Refugee) is free and open source. You have permission to republish this article under a Creative Commons license with attribution to the author and TrueActivist.com.