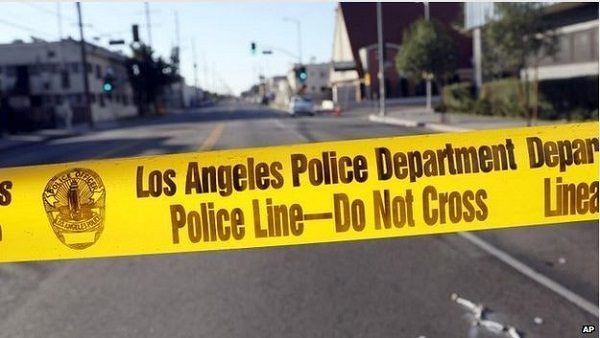 Cops in Los Angeles shot a mentally disturbed homeless man after he allegedly threatened them with a pipe. A cell phone video surfaced this week showing the man’s execution, which not surprisingly, wasn’t captured by the body cams worn by the two officers involved. The video again highlights one of the biggest problems with police use-of-force policy: that cops choose to kill instead of de-escalate situations.

If it wasn’t for the citizen who recorded the incident, the truth would never have come to light. While recording, the male can be heard saying, “Ninja man with a ninja stick. He’s not gonna die.” The witness obviously didn’t believe the situation required deadly force, so one must ask why did the police disagree? According to reports, both officers were wearing body cameras, however, neither officer activated them before killing the suspect.

Anytime you have the ability to document an incident but fail to do so, is a dereliction of duty and needs to be addressed by the supervisors. At best, this was a mistake by the officers which requires discipline. At worst, it was intentional malfeasance.

Police aren’t stupid. Not in the traditional sense. They encounter mentally disturbed homeless people daily. They already know these individuals often have a hard time grasping reality, and require state assistance both financially and mentally to survive. There has always been a war against the homeless in the US, and the police are on the front lines. Being that no one cares about them, police know they can get away with murder, literally. The homeless have no means of fighting back. Instead of de-escalating the situation and disarming the man, a feat that could have been accomplished with non-lethal means, they chose to execute him because the circumstances fell into a range of easily articulatable “facts.”

The cops involved obviously used the “he had a weapon” and “we feared for our lives” excuse. The reality is that their obfuscation of the truth will hold up in court because as stated earlier, cops will present a black and white version of events that include “a hostile subject” who was “armed with a deadly weapon” and “failing to obey commands.” The reality is, this and every situation ever brought to light is not black and white. They all have shades of gray; however, police have mastered the art of over-simplification in their justifications. They have consistently sold the public that despite the fact there are always other solutions to the problem, police who shoot people are heroes.

Another reality is that the homeless are known to officers who work that beat. Vagrant complaints come in every day and it’s the beat cop’s job to address them. They also knew, whether they admit it or not, that their subject was mentally ill, therefore unable to form actual intent. Was he a danger to anyone? No violence was reported until the cops showed up. His episode was almost guaranteed to be the combined product of mental illness and substance abuse, both requiring treatment – not death. This case again demonstrates how cops are more concerned with how things look on paper than with the hard truths of reality. Did this homeless man, who has obviously been rejected by the system and fallen through the cracks of society, deserve to die? Absolutely not. Did his actions meet the criteria for police to kill him? Yes. And that is one of the many problems with our modern system of law enforcement.

This article (Body Cams Off as Los Angeles Cops Execute Mentally Ill Homeless Man) is a free and open source. You have permission to republish this article under a Creative Commons license with attribution to the author and AnonHQ.com.