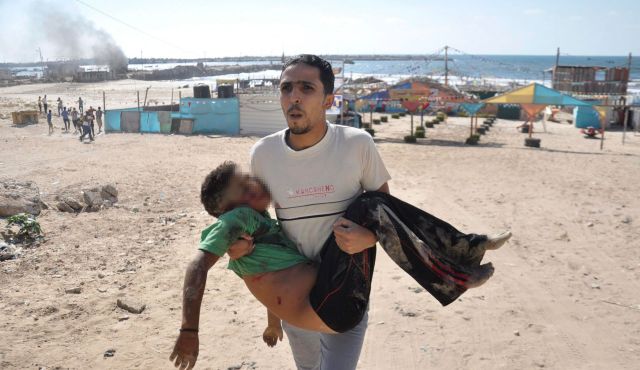 Just as you’ve come to terms with the atrocities in the world, and you’re tempted to think  that everything is sunshine and rainbows, something happens that shakes you out of your  reverie:  the Israeli military announced Thursday it has exonerated itself for killing four children on a beach in Gaza during last summer’s seven-week military assault on the besieged strip, prompting expressions of outrage and demands for justice from family members and international journalists who had witnessed the attack; this is not even considering the hundreds of women and children they had killed in that warrant-less siege, but there was no “disputing” what had occurred with these four kids. Even so, Israel once again manages to escape justice.

“There is no justice in the internal investigation,” declared Mohammed Bakr, father of 11-year-old Mohammad Ramiz Bakr, who was slain in the bombing along with his cousins Ahed Atef Bakr (aged 10), Zakariya Ahed Bakr (aged 10), and Ismail Mahmoud Bakr (aged 9).

“We are counting on the [International Criminal Court] and human rights,” he added. “We are not afraid and we are confident we will win because the world is with us.”

On July 16 of last year, the children were struck and killed by Israeli bombs while they were busy conducting the heinous act of… playing soccer on Gaza City’s beach.

Tragically, attacks like this are not unique. The Israeli air war and ground invasion, politically and financially backed by the United States,  a war that is being waged against an extremely densely-packed populace. About half of these” evil terrorists” are children and Palestinians are not able to leave due to a military blockade and siege. At least 2,145 Palestinians were killed in 50 days, the vast majority of them civilians and at least 578 of them children.

However, because this particular beach attack was waged in plain view of a hotel patronized by international journalists, there really wasn’t any way they could turn a blind eye to it… unlike the aforementioned 578 kids. Many prominent reporters served as direct eye-witnesses and some even aiding the wounded.

Pulitzer Prize-winning New York Times photographer Tyler Hicks was one of the witnesses. “There is no safe place in Gaza right now,” he wrote soon after the attack. “Bombs can land at any time, anywhere.”

However, after the subsequent internal investigation of the killing, the Israeli military cleared itself of wrongdoing, declaring the killings an accident… and everyone believes them for some reason.  In a statement released Thursday, Israeli Army spokesperson Lt Col Peter Lerner said that “the Military Advocate General found that the attack process in question accorded with Israeli domestic law and international law requirements.” Yeah, it’s all lawful as long as criminals make the laws.

The statement went on to claim that the attacks were justified because Israeli forces had reason to believe the children were Hamas “militants.” However, investigators admitted that the probe only included testimony from Israeli soldiers and officers.

The military’s version of events were quickly called into question by witnesses, includingThe Guardian’s Peter Beaumont, who pointed out the following discrepancies:

Interestingly, even its own soldiers take issue with the military’s proclamation of its innocence; testimony of 60 Israeli officers and soldiers who took part in the war said that the “massive and unprecedented harm” inflicted on the population of Gaza stemmed from the top of the chain of command, which gave orders to shoot indiscriminately at civilians. That’s right, the whole point was murder.

Policy director for the U.S. Campaign to End the Israeli Occupation, Josh Ruebner,  told Common Dreams, “The killing that occurred on the beach that day was magnified a hundred fold [during last summer’s war]. Yet there have been no cases in which Israel has held itself accountable for any of these horrific war crimes in Gaza, either from last summer or Operation Cast Lead in 2009. The U.S. is complicit.”

The results of Israel’s inquiry were announced just days after UN Secretary-General Ban Ki-moon removed the Israeli military from an official list of groups that violate children’s rights, following heavy pressure from the United States and Israel. Israel, backed by the U.S., has vigorously opposed UN investigations into war crimes. Pretty sure they “cleared themselves” of guilt after having a chat with the Sec Gen.

“Israel behaves as if it’s a country above international law,” stated Zakariya Bakr, the uncle of the killed Bakr cousins, on Friday. “We urge the international community to act seriously to stop this farce.”