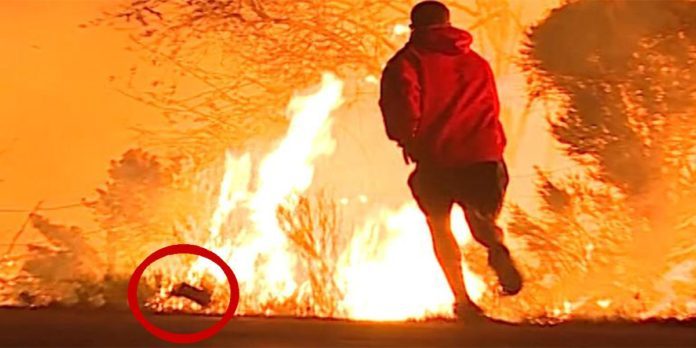 (Truth Theory) Those who are defined as “heroes” tend to be the bravest among us. However, after the act, they’ll often just say they were doing what anyone else would do. That’s not true.

There are three types of people in this world: those who act in alarming situations, those who freeze up and do nothing, and those who make the conscious choice to ignore the situation and move on. Recently, an anonymous man in Ventura County, California, proved himself to be the first type of person when he risked his well-being to save a rabbit from a blazing fire.

As CNN reports, the unnamed individual darted out of his car upon seeing the frightened animal. The video shows him panicking initially over the critter’s erratic movements but eventually, he caught on and chased it down. After catching the rabbit, he scooped it up in his arms and carried it away — flames licking the ground as he walked.

The photographer who managed to capture the footage (which has since warmed million of people’s hearts) said he attempted to interview the man on-camera directly afterward. However, the brave citizen declined.

At the time, the individual probably thought he was just saving the rabbit. However, he did more than that: he re-inspired faith in humanity, as many Twitter users have attested.

Watch the harrowing footage below:

If you need your faith in humanity restored just watch this video of a man saving a wild bunny from the #LAFires pic.twitter.com/Ke4hr59Lwk

Because the mainstream press tends to prioritize negative happenings, it can oftentimes seem like no good exists in the world. Let this recent rescue remind you that there are kind people willing to do the right thing — even when they’ll gain no recognition from it. That’s true heroism.