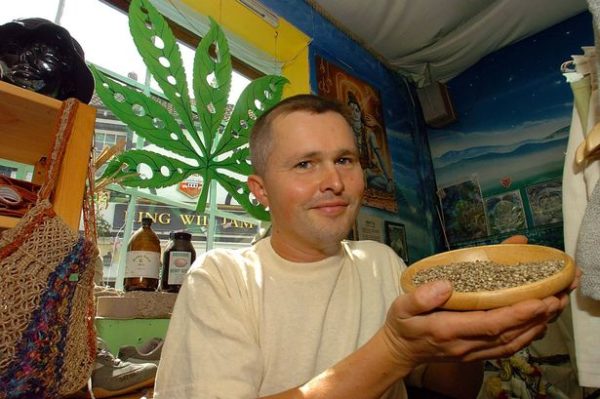 A British man from the town of Glastonbury in England has said he defied the law and secretly planted marijuana for 18 years, until it was discovered recently.

The man, who has been an active campaigner for the legalization of the plant in Britain, changed his name by deed poll to Free Cannabis. In 1998, it is said Mr Cannabis got into trouble with law enforcement officials after he attempted to give marijuana to former Labor Member of Parliament, Jack Straw.

According to the man, since it is illegal for him to grow a plant with enormous medicinal value, he decided to find his way out the problem. He revealed he has been secretly growing marijuana in the town’s award-winning public flower displays for nearly two decades. He said he planted the marijuana with his own seeds, and that the city council watered it for him. Apart from secretly planting the seeds among the flowers, he and some his friends also planted the plant at the back of his shop, which they cultivated to make medicine to heal people. Some local users also enjoyed the plant at the shop.

Mr Cannabis said while he was doing this, he was worried about how society has deliberately been made to hate a plant with many benefits for people. “I and others come along and drop the seeds into the tubs; they get watered by nature – and the council. I am amazed that people get so excited about this; it’s a sad reflection of society’s hemp-phobia. This is a plant that has so many medicinal qualities – it’s a food, it’s used for fibre and fuel, it basically gives you everything you need,” he said.

However, Mr Cannabis’ activities were discovered in mid-August this year after the city’s police received a complaint that he has planted marijuana in the city. The police then followed the tipoff, and destroyed the plant. Mr Cannabis said he is very sad over the removal of the plant, but will not give up in his attempts to educate his society; that the plant is not as bad as it has been portrayed, over the years.

Mr Cannabis said his dream is to see a world in which the marijuana plant is honored, respected and grown freely for the benefit of the human race. Since Mr Cannabis revealed his secret planting of the plant, he has gained media attention, particularly on social media. Many marijuana advocates have congratulated him for what they described as a bold step, one he took in the past 18 years. According to the British Home Office, it is illegal to possess marijuana in any form. Without a so-called appropriate licence, it is also illegal to grow, distribute or sell marijuana in the United Kingdom. However, over the years in the United Kingdom, marijuana advocates have been gaining momentum in their quest to have the plant legalized and regulated in the country. In 2015, James Richard Owen, an economics student at Aberystwyth University, started a petition on the country’s official petitions website, calling for the legalization, cultivation, sale and use of the plant.

The petition gathered 218,995 signatures, far exceeding the 100,000 needed for it to be considered for debate in Parliament. On October 12, 2015 the country’s Parliament debated the petition.

This article (British Man Grows Marijuana Secretly for 18 Years, City Council Waters it for Him) is a free and open source. You have permission to republish this article under a Creative Commons license with attribution to the author and AnonHQ.com