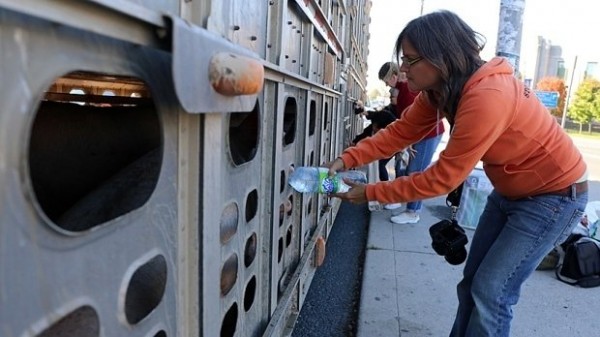 A court in Canada has charged a woman with criminal mischief including the interference with the use, enjoyment of and operation of property, in a preliminary hearing after she gave water to pigs heading to the slaughterhouse to drink on a hot summer day in June 2015.

The woman, Anita Krajnc is a known animal rights activist. She has been campaigning against cruel treatment of animals across Canada. She founded the organization, Toronto Pig Save to bear witness to the suffering of animals in transport and at slaughterhouses in Canada. If Anita is found guilty by the court, she could face a sentence of up to 10 years in prison, according to court documents seen by local journalists.

A Recorded video of the incident which was later posted on Social Media showed Anita shouting at the driver: “Jesus said, ‘If they are thirsty, give them water.’” The driver then responded: “You know what? These are not humans, you dumb frickin’ broad”. The driver threatened to call 911.  The two appeared to be filming each other. The driver used his cell phone to record Anita. Anita too is seen holding a camera and the water.

The owner of the pigs, Eric Van Boekel later filed a police complaint the day after the incident. He claimed his pigs were treated in accordance with all national standards and regulations.

But Anita said Canada is behind the rest of the Western world when it comes to animal transportation regulations. She claimed animals are treated very cruelly before being killed in the country.

After the pre-trial procedure of the case, Anita told reporters that she did not do anything wrong, and that she will not allow the case to deter her from her activism.

What is wrong with the legal system? #CompassionIsNotACrime #StandWithAnita Offering water to a thirsty pig is an act of compassion #Canada

She was quoted as saying “Everyone knows that compassion is not a crime. In fact, I did nothing wrong when I gave water to thirsty pigs; many of you have given water to thirsty pigs, and we’ll continue to do that”. The next trial is set for December 15. The RT English News reports that the court proper will hear the case no earlier than August 2016. Anita’s organization, Toronto Pig Save also issued a press release condemning the nature of Canada’s transportation system for animals. “Canada has the worst transportation regulations in the Western World, worse than Australia, New Zealand, the European Union and the United States”, the organization said.

Social media users have started several online petitions to support Anita. On Twitter, the hashtag is #StandWithAnita. Many have twitted to the new Prime Minister of the country, Justin Trudeau to intervene in freeing Anita. PM Trudeau has not yet responded to the petition.

Another online petition we have seen has over 131,000 people signing. It is targeting the Ontario Ministry of the Attorney General in Milton Courthouse where the case is being heard.

The petitioners wrote “Compassion is NOT criminal! Why do inmates on death row get a last meal, but innocent pigs are denied water? Why are praised for helping thirsty dogs and cats, but charged as criminals for helping pigs?”.

We are closely following the case. We will report on the latest if there is a new development. Stay with us. Expect us.

This Article (Canadian Woman Faces Up To 10 Years In Prison For Giving Pigs Water To Drink [Video]) is free and open source. You have permission to republish this article under a Creative Commons license with attribution to the author and AnonHQ.com