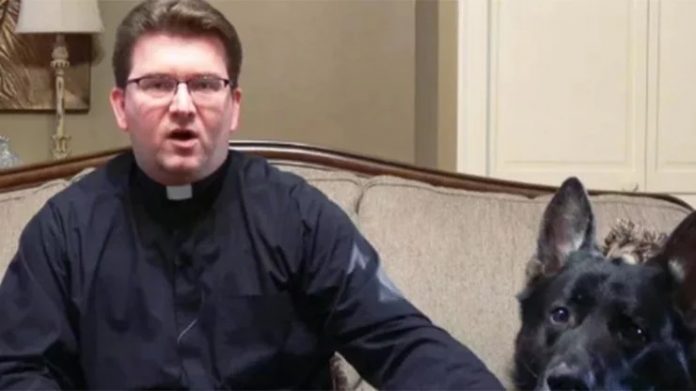 (TMU) — In the latest bizarre confirmation that racism remains a pressing issue in the United States, a Catholic priest in Tennessee has been accused of harboring bigoted racial attitudes after his secretary told a black housekeeper that she was not allowed to clean his home because of his pet “racist dog.”

The allegations were leveled by two women against Rev. Jacek Kowal, a pastor at the Catholic Church of the Incarnation in Collierville, according to the Commercial Appeal.

During the incident, housekeeper Emily Weaver was training her replacement LaShundra Allen in May. Both women are employees of Master Building Service Contractors, which has long helped clean the reverend’s home along with the church and parish school.

Allen, who is black, explained to local Fox affiliate WHBQ:

“I was just supposed to clean the church and I was supposed to go to the pastor’s house and clean as well. They were just like, ‘Well, I’m not really sure how to say this,’ kind of like in a joking way, ‘But Father Jacek doesn’t want black people cleaning the house because his dog is racist.’”

Allen and Weaver are now asking the Catholic Diocese of Memphis to fully investigate their complaint, discipline the reverend, and pay compensatory damages and attorney’s fees for the alleged act of racial discrimination.

Attorney Maureen Holland, who is representing the women, wrote in a letter to the diocese:

The two church office employees then reiterated that Father Jacek ‘did not want (Ms. Allen) there’ and that they needed to leave. Both Ms. Allen and Ms. Weaver were shocked, humiliated, and felt severely disrespected by this treatment and the statements.”

Continuing, the letter added that “it is quite easy to see the racism in this exchange” and the interaction “most strongly suggests that Father Jacek and his staff did not want an African American woman cleaning his home.”

@Pontifex
Can you please address the issue of the Rev. Jacek Kowal, a pastor at the Catholic Church of the Incarnation in Collierville, Tenn. who banned his black housekeeper and blamed his racist dog? As a Catholic, how is this person a priest?

Allen explained that this was the first time she had experienced racial discrimination, and the fact that it came from the reverand and his church staff was particularly terrible. She noted:

In his defense, the church leader wrote a statement that truly strains credulity with its theological insistence that he is not racist. Kowal wrote:

“As a disciple of Jesus Christ, I wholeheartedly believe all forms of discrimination based upon race or ethnicity are sinful and wrong.”

Kowal explained that the dog, whom he adopted in 2012, had once “had a bad experience with a stranger who happened to be African American.” He added:

“Since that time, Ceaser (the dog) has been aggressive with strangers until he gets to know them … And this is especially true for strangers that happen to be African American.”

The Catholic Diocese of Memphis has defended Kowal, with local Bishop David Talley noting in a statement Friday that “claims of racial bias and discrimination are unfounded” and recalling parish staff as having said, “Fr. Jacek’s dog is kinda racist.” The letter added that the dog became “somewhat more agitated initially around strangers with darker skin, until the dog gets to know them.”

The story recalls a classic episode of comedy TV show Curb Your Enthusiasm, where lead protagonist Larry David adopts a dog that apparently dislikes his dark-skinned friends, raising questions as to whether he trained the dog to dislike black people.