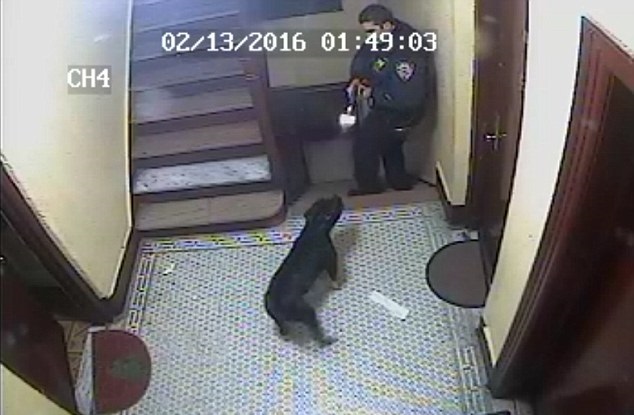 Recently released CCTV footage shows the heart wrenching moment an NYPD officer fatally shot a family’s dog in an unprovoked attack. The devastated family are now seeking justice for their beloved pet and are calling for the officer to be held accountable for his actions.

On February 13, Yvonne Rosado had been dancing with her dog Spike—a cherished weekly ritual in which Spike stood on his hind legs so Rosado could hold his paws—when the dog became excited by activity outside of the front door of the apartment.

“He’s right there when the music’s about to start,” Rosado explained. “I dance around with him and I spin him with one paw.”

Outside the apartment, NYPD officers were speaking to 16-year-old neighbour, Serena Santiago. Earlier that night, a neighbour had called the police for an unrelated issue. When Roasado opened her door investigate, Spike slipped out of the apartment, his tail wagging, to greet the officers.

“When I realized that it was an officer in front of the door, I said, ‘He’s friendly! He’s friendly!'” Rosado said. In the surveillance footage that captured the horrific incident, Spike—who shows no signs of aggression—exits the apartment and approaches one of the officers, who has already drawn his gun. The officer then proceeds to back down the stairwell before opening fire on the happy pooch. The officers then left Spike, who had been wounded from a single gunshot to the head, to die in pool of his own blood.

“The officer just started backing away, and I thought he was pointing his finger at him, but he pointed the gun and shot,” Rosado said. “Everything happened in less than one minute.”

Immediately after the shooting, Rosado ran out of her apartment and tried to comfort her dying pet. Overcome with distress, Rosado—who was in nothing but her undergarments at the time— then proceeded to confront the officers, slipping over her dogs blood in the process. Three male officers then violently forced the grief stricken owner to the ground and pinned her to the stairs. “I was very emotionally upset,” said Rosado. “They jumped on top of me – three men,” she said. “I’m in my undergarments in the hallway.”

“They pinned her down to the stairs,” added neighbor Irma Santiago. “Her whole back was black and blue.”

Rosado, who has said that the incident has left her traumatized, is haunted by the incident every time she leaves the house. “He was a big Snuffleupagus — a gentle giant,” Rosado described Spike to the New York Daily News. “He was a member of the family … He would wag his tail, letting everyone know he was friendly.”

In addition, Santiago has said that her daughter has been “traumatized” by the gruesome shooting, and has had to seek psychiatric help in order to help her deal with the horrifying events that she witnessed.

Since the incident, Rosado has retained attorney David Thompson of the firm Stecklow & Thompson in an effort to seek justice for her beloved pet. “I want the officer to be disciplined for what he did to my beloved because he tore away something, a family member,” she said.

The NYPD have yet to offer Rosado an explanation or apology for the murder of her pet, and have refused to disclose the identity of the officers involved. An unnamed source cited by the Daily News identified the officer as Ruben Cuesta, however, this information has not been verified. According to reports, the officer went to the hospital to be treated for tinnitus.

This Article (CCTV Footage: NYPD Cop Shoots Friendly Family Pet In Unprovoked Attack ) is free and open source. You have permission to republish this article under a Creative Commons license with attribution to the author and AnonHQ.com.