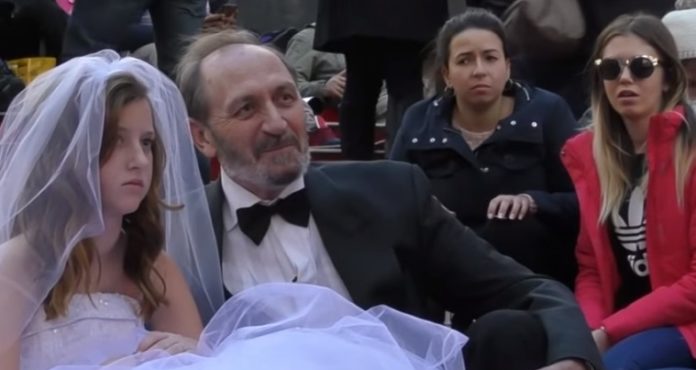 Titlepicture: Staged wedding of an adult with a child as part of a campaign.

A new data compiled by Unchained At Last, a group campaigning to abolish child marriage, and investigative documentary series Frontline, reveals that at least 207,468 minors were married in the U.S. between 2000 and 2015.

The two organizations believe the true figure is likely to be much higher than what was uncovered. They say 10 states in the country failed to provide data or provided incomplete statistics to the investigators.

Three 10-year-old girls and an 11-year-old boy were among the youngest to wed, under legal loopholes which allow minors to marry in certain circumstances.

The minimum age for marriage across most of the states in the U.S. is 18. However, some states have exemptions – such as parental consent or pregnancy – which allow younger children to marry at a young age.

Children as young as 12 were granted marriage licenses in states including Alaska, Louisiana and South Carolina.  11 other states allowed 13-year-olds to marry. Despite most states setting the age of sexual consent between 16 and 18, making sex with a minor an offense, the data revealed the licenses were approved by judges before the children could legally consent to sex.

Only 14 per cent of the children who wedded were married to other minors. Most married a partner aged 18 to 29, with 60 per cent aged between 18 or 20.

Founder of Unchained at Last, Fraidy Reiss, told Frontline that she was “literally shaking” when she first obtained the child marriage data from New Jersey.

“That number was so much higher than I had thought it would be. Then, the fact that the children were as young as 13 and the fact that it was mostly girls married to adult men.”

Jeanne Smoot, an attorney with the Tahirih Justice Centre, an organization which offers legal services to women fleeing violence, said the young girls are forced to get married because they come from poor families.


In May, the governor of New Jersey, Chris Christie, refused to sign into law a bill that would have made the state the first in the U.S. to ban child marriage without exception. The bill was overwhelmingly approved by both houses of the legislature. But Christie claimed it would conflict with religious customs.