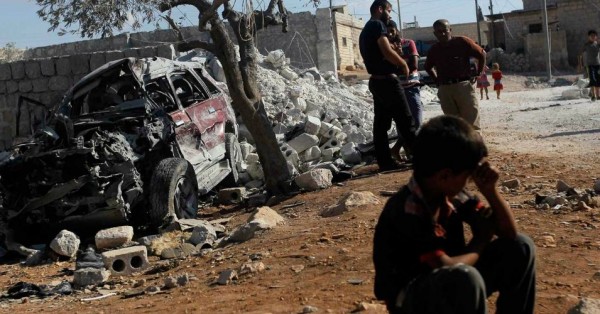 A comprehensive report by a monitoring group of the US-led aerial bombardments against the Islamic State of Iraq and Syria (ISIS), has revealed that more civilian casualties have been recorded since the beginning of the campaign in 2014.

The group called Airwars, said it has documented at least 459 civilian deaths and that their method of compilation is based on credible reported sources in areas where civilians were hit. Many of their claims are backed by photographs, videos, and biographical information about the victims.

The bombing campaign in Syria and Iraq is in its first year. The Pentagon has said the coalition has carried out over 5,900 strikes as of August 2015, and that only two civilians have died as a result of these strikes. In June 2015, Lt. Gen. John Hesterman, a former combined forces air component commander, called the bombing campaign “the most precise and disciplined in the history of aerial warfare.” Humanitarian activists say the mainstream media’s reluctance to report on the civilian casualties is causing the Pentagon and people like Gen. Hesterman to be left off the hook. Critical checks across a number of major mainstream news organizations, such as CNN, New York Times, Washington Post, BBC, and a number of other western media outlets, have revealed a complete media blackout on the issue.

Airwars has said had it not been for the brave efforts of reporters from McClatchy, many of the larger incidents would have gone unreported. One such case was covered by reporters in the Aleppo region, near the Turkish border, where the coalition bomb hit a prison which contained civilians who were arrested on minor crimes by ISIS.

One witness told the reporters that the explosion shook the entire city. He also said that he saw women in the town screaming and crying when they found out that the building where their relatives were being held had been hit. The prison was leveled; however, it took a number of days before the rubble was cleared and all the bodies were extracted and returned to the victims’ families. More than 58 civilians, including a number of teenagers, were said to have been killed in the attack. Although the Pentagon never disclosed the incident publicly, a week later, reporters at McClatchy got a tip-off from one of their partners in Syria. After persistent questioning, the Pentagon admitted it had carried out the attack. McClatchy published the story and included photographic evidence, NGO corroboration, and witness accounts to back up it’s claims.

According to the Common Dreams, even after the McClatchy’s report was published, very few media outlets picked the horrible story up. The story just died silently as if those who were bombed were the terrorists the coalition is fighting against. Roy Gutman, one of the journalists who covered the devastating incident, said only one reporter called him to follow up the story. A leading member of Airwars, Chris Woods, said he is shocked at the posture the media has adopted in covering the bombings. He was quoted as saying, “The material was always there. Why haven’t news organizations gone looking for that? The lack of contacts from colleagues was definitely surprising. It was amazing, it’s absolutely essential that all news organizations follow up on these things.”

All these denials from the Pentagon are neither surprising or unique, throughout history thousands of  civilians have died as a result of US-led air campaigns. In the first year of the Iraq War, aerial bombings resulted in over 2,000 deaths. In Afghanistan, over 3,000 civilians were killed in the first year of the aerial campaign. In all these cases, the Pentagon tried to deny that civilians were being hit.

Meanwhile, the fight against ISIS is still ongoing, and by the time it is done, we must be prepared to hear more horrible stories from activists.

This Article (Civilian Deaths Keep Surging In The US-Led Bombing Campaign Against ISIS) is free and open source. You have permission to republish this article under a Creative Commons license with attribution to the author and AnonHQ.com.