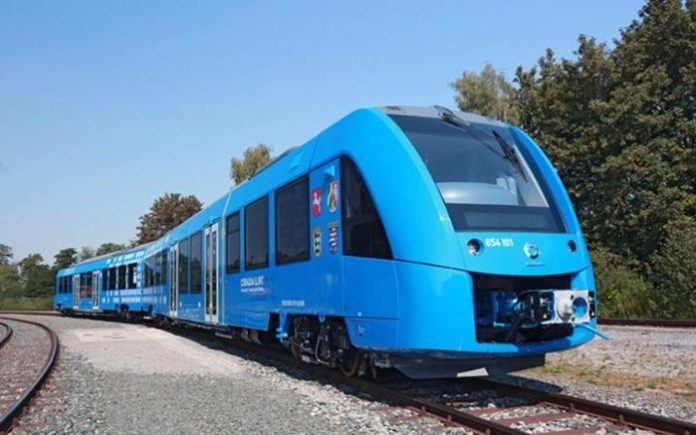 The clean energy revolution is resonating in the ears of governments around the world. With clean energy, humans can save themselves from many diseases associated with air pollution, and also save the planet from the destruction of Global Warming at the same time.

Germany has announced that it will soon start operating hydrogen-powered trains in an effort to affirm its noble objective of boosting clean and renewable energy in the country. The train known as Coradia iLint will be the first train in the world to be powered with hydrogen. Currently, Germany runs around 4,000 trains. All are powered with diesel, polluting the atmosphere as they move along. Coradia iLint is developed by the French rail transport company, Alstom.

According to Alstom engineers, the hydrogen that fuels the train is held in huge battery cells on top of the train.  As the hydrogen is mixed and burned with oxygen, it produces remarkable amounts of heat, which in turn, crank the turbines of the engine of the train for extreme amounts of electricity.  The only byproduct from this reaction is water vapor or steam, meaning the train doesn’t pollute the environment.

Die Welt reports that the Lower Saxony government has already ordered 14 of the trains from Alstom. Lower Saxony is a state located in the northwest of Germany. It is said if operations of the train are successful in the area, it will quickly be extended across the country.

Coradia iLint can travel almost 500 miles per day at speeds of up to 87mph and makes no noise. Its engineers say the only sound it generates comes from the wheels and air resistance.

“Alstom is proud to launch a breakthrough innovation in the field of clean transportation. It shows our ability to work in close collaboration with our customers and develop a train in only two years,” he said in a statement.

In August this year, Alstom presented its remarkable invention at the Innovation Transport trade show in Berlin. At the event, it was revealed the train is the first hydrogen-powered vehicle to regularly carry people over long distances.

Testing is set to be carried out by the end of the year, before it opens up to the public in December 2017. Countries such as the Netherlands, Denmark and Norway have reportedly expressed strong interest in the train. These countries are known for making frantic efforts to diversify their traditional energy sources to clean and renewable sources.

In an attempt to eliminate pollution and give the environment and humanity a sustainable future, the Netherlands announced in August 2016 that its lawmakers will hold a roundtable discussion to consider how to outright ban petrol and diesel cars in the country as early as 2025. The Dutch Labor Party proposed the ambitious law in the Dutch parliament in March 2016. In July 2015, Denmark proved that it wants to be the first European country to sustain itself fully on clean and renewable energy. Denmark’s wind farms generated enough electricity to meet all of its national needs and more. The wind turbines reportedly generated 116% of the country’s required electricity.

Just heard that Norway will ban new sales of fuel cars in 2025. What an amazingly awesome country. You guys rock!! pic.twitter.com/uAXuBkDYuR

Norway also announced in June 2016 that it will ban the sales of fuel cars in 2025. When this news was made public, Elon Musk tweeted, congratulating the country for making such a bold decision.

By developing this hydrogen-powered train, it means these countries are gradually saying goodbye to fossil fuels, marking a huge milestone for them and their citizens, and setting the bar for other nations to follow.

This article (Clean Transport: Germany Sets to Unveil Hydrogen-Powered Train that Emits only Steam [Video]) is a free and open source. You have permission to republish this article under a Creative Commons license with attribution to the author and AnonHQ.com.