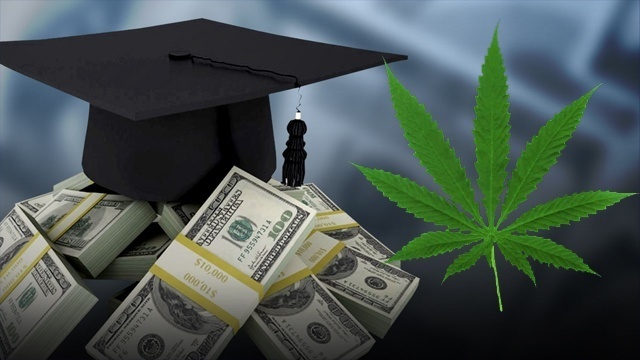 In 2015, Pueblo County voters approved a 5% excise tax on marijuana growers — which brought their tax rate from 15% to 20% and which is expected to raise $3.5 million annually by 2020 — to fund college scholarships for local students who attend either of the county’s two public colleges.

When the Pueblo County voters passed Pueblo County Ballot Initiative 1B, Pueblo County Commissioner Sal Pace proclaimed that “it was time to make college affordable for everyone in the community.”

“Pueblo’s school districts 60 and 70 graduated 1,389 students in 2014. Roughly 400 of these students attended a college in Pueblo. We’re hoping these scholarships will help motivate Pueblo’s youth to graduate high school, by alleviating some of the problems of college debt.

In 2016, 25 students were awarded $2,000 marijuana funded scholarships — $1,000 from the excise tax funds and a matched $1,000 from the Colorado opportunity grant — by the Pueblo Hispanic Education Foundation to further their education in any field of study at Colorado State University-Pueblo or Pueblo Community College. Beverly Duran, executive director of the Pueblo Hispanic Education Foundation, told USA Today:

“It’s incredible. Every year we get a nice pool of students but we can always only award to a small percentage. This for us expands that to extraordinary lengths. While people are still debating whether to keep legal marijuana, there’s a general sense that the tax dollars ought to be put to work, no matter where they came from. We haven’t felt very much pushback from the community. People seem to think, well, if it’s going to be legalized, might as well put those dollars to use for our kids.”

In 2017, every high school graduate from the city or Pueblo County will automatically be eligible for a college scholarship thanks to Pueblo County’s marijuana excise tax fund, under which at least 50% of the revenue will be set aside for the scholarships while the remaining 50% will go towards medical marijuana research, road and hiking trail upgrades, refurbishing a historic courthouse and other public improvement projects.

Xavier Madrid, a student who received the scholarship and plans to pursue liberal studies to become an elementary educator, told The Denver Post there is no reason to criticize the scholarship just because it was funded from marijuana excise taxes.

“Getting the scholarship, I believe, is a very great opportunity. It gives me that extra motivation to go and achieve school. I’m humbled to be one of the first ever to receive the scholarship, and I believe it’s more than just marijuana money.”

This article (Colorado: World’s First Marijuana Funded Scholarship Awarded to 25 Students) is a free and open source. You have permission to republish this article under a Creative Commons license with attribution to the author and AnonHQ.com.