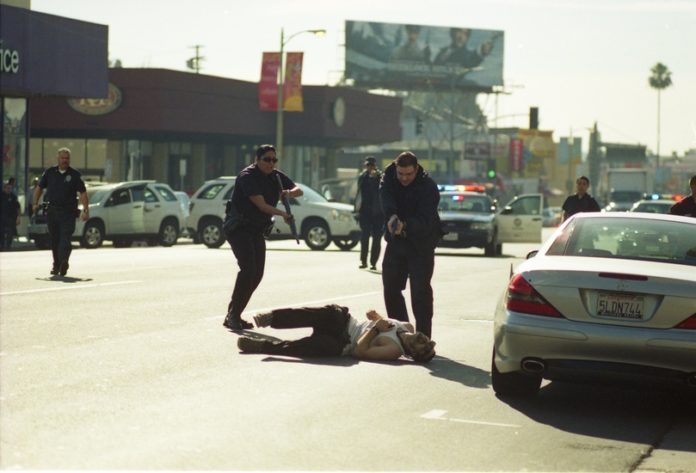 Certain pundits have reported that police “justifiable homicides” “may” have reached a twenty-year high…. But they claim that because police agencies are not required to report these statistics, it may simply be due to more cases getting counted in recent years compared to all years prior. Rubbish. If the police were to have been mandated to report these statistics from the get-go, we’d have a more useful comparison. Unless of course, the intention was to prevent such a comparison.

Agencies have an incentive to simply refuse to report these numbers if they had an unusually high rate of homicide. If anything this only suggests that the baseline numbers could be higher; having no ability to judge whether the officers of any ONE year are more/less likely to report their stats, we can only accept the statistics as they are; flawed but the only numbers close enough to be of use.

Taking the position that we indeed are reaching levels of police homicides last seen in the early nineties, this piece will examine the possible reasons for the rising use of lethal force; “justifiable” or otherwise.

80% of Police officers are overweight, according to a study by the FBI. You could argue that this is a general trend in America, that cops are simply following the general populace in terms of obesity…. You’d be quite mistaken, actually, because the police are leading the trend when it comes to weight-gain: Time quoted a WSJ report, stating that the police ranked in the top three most obese professions of 2014, with 40.7% of all police, firefighters and security guards clinically obese.

Apparently fighting crime no longer requires you to chase down the bad guys, and lay down a beat-down. This is part of a wider trend. In just 2013, the most obese professions were transportation, manufacturing, repair and service industries. At 36.4% obesity, even transport workers who literally had to sit around for the entire day had a lower level of obesity than police in 2014.

What we observe is a increasing rate of police “legitimate” use of lethal force, that seems to closely, at least recently, correlate to a sudden spike in police obesity. (The 2014 study was from the WSJ, while the 2013 one was from Gallup. It is possible that their methodology differs enough to account for the observed differences, to some extent).

It would make sense that obese cops are less likely to chase after leaner, meaner criminals. Firstly, they’d never catch them. Secondly, they’d never beat them in a fight. In cases where they are within range of a melee weapon, overweight and undertrained officers would reach first for their side-arm, and not a baton. Although physically fit officers might be more liable to use excessive force, as observed in the recent choking of Eric Garner, one’s fists are rarely lethal weapons. This would be more likely to result in “criminals” being able to testify in court, preserving some potential for justice. Dead men tell no tales though, and officers who draw their guns have a penchant for making certain that their suspects are unable to stand up again.

There’s also the possibility that police are becoming more aggressive for other reasons; an Us VS. Them mentality, and their increasing militarization giving them access to more potent weapons as well as a more…. authoritarian mind-set. Soldiers are often forced to view the world with such a mentality, in order to survive, they have to justify shooting at any civilians who might pose a remotely small threat (How do you imagine the American Sniper got such a high kill count, and even claims to have executed looters in the aftermath of Katrina? Sure he lied about Katrina, but I reckon he saw looting in other countries as death-penalty offences).

So what happens when all this gear gets allotted to officers who had lost a colleague to a drug-trafficker? Chances are, any civilian who looks a bit shadier will become a dangerous suspect.

“Theory underlying the weapons effect or similar kinds of phenomena would suggest that the more you fill the environment with stimuli that are associated with violence, the more likely violence is to occur,” said Bruce Bartholow, a University of Missouri social psychologist who has studied the weapons effect. Brad Bushman, a psychologist at Ohio State, agreed. “I would expect a bigger effect if you see military weapons than if you see normal weapons,” he said.

When presented with faceless, militarized officers, protests are also more likely to turn violent; Gil Kerlikowske, the head of U.S. Customs and Border Protection and former police chief of Seattle, drew out this distinction in a striking recent interview with NPR’s Steve Inskeep. He explained that at the one-year anniversary of the damaging 1999 World Trade Organization riots, he took conscious steps to have his officers dressed like police rather than a counterinsurgency unit, which he said made it easier to deal with potentially dangerous crowds.

When ordered to use militarized units for the officers’ “protection”, he realized that protests became edgier and led the crowds to turn against officers and even on themselves.

But what about the quality of officers? Could it be that acceptance of borderline psychopaths, or literally stupid people is a contributing factor? Well, as ABC reports, a court had ruled that it is OK for potential officers to be discriminated against based on their IQ…. If you score too high, you’re not officer material.

The 2nd U.S. Circuit Court of Appeals in New York upheld a lower court’s decision that the city did not discriminate against Robert Jordan because the same standards were applied to everyone who took the test. That’s right, everybody who took the test had to be dumb enough to pass. Stupidity is a rare quality these days….

Police recruitment videos have also been seen to becoming more appealing to the sort of person who has an inherent violent streak, with Washington Post arguing that these videos will only attract those who are innately unpleasant.

In short: militarization makes cops more violent, and causes protesters to behave more violently. Obesity and the changed mind-set of officers seems to lead them to also prefer to use lethal force. Police agencies are purposefully scraping from the bottom of the barrel in order to ensure that officers are too stupid to question their authority, and psychopathic enough to not care regardless.