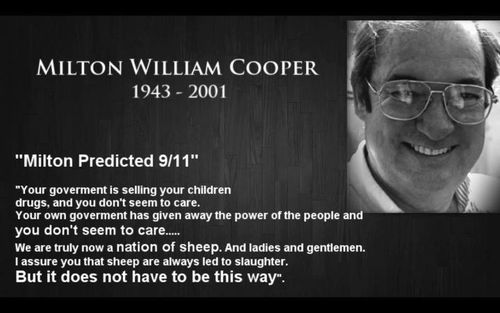 A man by the name of William Cooper died shortly after the 9/11 catastrophe. It was a catastrophe that has led to the current state of affairs that we are witnessing today. With the war-front on all sides… from invading states in the name of liberal democracy, to the recent state of emergency declared on hackers… the world is invariably changing with dramatic speed. William Cooper tried to warn us about the nature of these events through his radio programs, his writing, and his investigation. Cooper was a member of the naval intelligence when he was but a young man, and was reared in a military family; he lived on bases with his father for most of his adolescent life. A self-declared pro-establishment guy, Cooper, after years of combat and serving with intelligence on a submarine, witnessed a disc-shape rise from the ocean. This conflicted with the laws of physics as he knew it. This was in 1966. Post-birthing at the submarine base at Pearl Harbor, he and the other crew were debriefed, told never to speak of what they “never saw” or face massive consequences and imprisonment. It was then that Cooper learned of the culture of secrecy in the military, and the severe consequences that could be placed around his neck for speaking about its secrets. Shortly after, he was run off the road in an accident that resulted in the amputation of his leg. The people responsible even visited him in hospital, warning him to keep quiet. It was then that Cooper realized that he had to protect himself if he was to uncover the truth, a truth that he suspected existed within government facilities. From UFOs to government cover-ups, and from hidden cancer cures to terrorist attacks, he understood the risks this entailed.

In the late 1990s, after establishing CAJI, at one point the largest global civilian intelligence gathering organization in the world, the government began harassing Cooper by any means they could: tax evasion and bank fraud… accusations that were never substantiated. In contrast, banks gave William Cooper a glowing report: he paid his bills early and had no debts. But, eventually, Cooper was forced to send his wife and family into hiding as he fought the trumped-up charges. President Clinton, at the time, placed him on the File Gate list: a list of people who were deemed a threat, a list that involved questionable surveillance on these “threats”. On the 6th November 2001, a confrontation occurred between William Cooper and law enforcement agents. These men had supposedly disguised themselves as rowdy teenagers, and used this ruse to lure him from his house. William Cooper was then shot dead, allegedly because he was part of a militant anti-establishment movement. The occurrences of that chaotic day are still unclear, but his body was left on the doorstep for 15 hours… with no medical attention, or intervention provided… and no cameras, or recordings made of the unfolding events that led up to his death. Months before his death, his radio program had broadcast that there was a high likelihood of a terrorist attack on American shores, possibly involving Osama bin Laden who would be portrayed as the next Saddam Hussein by the government. He predicted the reactions to the attack, the risk of a police state. When he was dared to give a time line, he stated that the attack would occur on  his June 28th 2001 program. He stated that it was only weeks away from happening [in his opinion]. Just weeks after 9/11, and months after his striking predictions, William Cooper was shot dead at his residence.

“Those of you who are smart enough to know what is transpiring here, know that these are historic broadcasts…And by making these broadcasts I have sealed my fate.” – A martyr for the truth.