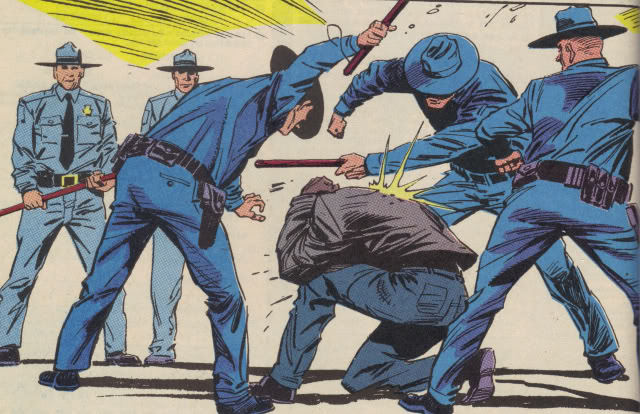 When taking the police officer’s oath, these five cops prove that upholding truth and ensuring justice are not necessarily a cops job. More often than not, we are faced with news stories describing horrendous acts against the public good by police. It has become apparent that police have their own agendas with telling the truth not always fitting into their narrative. Some cling to the bad apple theory of policing, believing that it is only a handful of bad ones that give the good ones a bad name. When we keep discovering cases of officer misconduct on a seemingly daily basis, it becomes hard to believe the bad apple theory. In just the last year, these five cops got busted lying and paid with their freedom.

In Manhattan, NYPD officer Jason Munoz was arrested in December after surveillance footage proved he lied over the arrest of a 20 year old woman. In March of 2014, Munoz arrested the woman whom he wrote in his report was suspected of buying marijuana. He stated that she assumed a “fighting stance” and threw several punches at him. When the video surveillance surfaced, it proved that he fabricated the entire incident and searched the woman illegally. Munoz now faces up to four years in prison for lying over what initially seemed like a routine arrest.

In Chicage, four cops were charged with lying in regards to a drug case. Chicago PD officers Sgt. James Pader, William Pruente and Vince Morgan along with Glenview Police Officer James Horn, were all charged with felony lying under oath for their part in a drug bust. The officers involved, covered up an illegal search resulting in the arrest of Joseph Sperling. Officers’ stated that they smelled marijuana coming from Sperling’s vehicle. At this time, a large amount of marijuana was observed in the back seat. This was a fabrication, as dash cam video that surfaced proved the officers illegally detained Sperling and searched the car before discovering the marijuana in a black bag on the back seat.

A Houston Police officer, William Wright, was busted lying about an arrest he manufactured. Wright arrested Julian Carmona, a concealed carry permit holder, for aggravated assault. Wright claimed that Carmona pointed his firearm at him, which resulted in the felony charge and a $30,000 bond. A surveillance camera captured the incident, which proved that Carmona’s firearm was in his vehicle throughout the entire incident until it fell out of the open driver side door. Wright was off duty and had just bought beer in his uniform, a direct violation of police policy. Wright claimed in his report that Carmona pointed his gun at him twice during the encounter. Neither occurred. Carmona’s charges have not yet been dropped.

The most well known case of police burying the truth is undoubtedly the case of Sandra Bland. The officer who arrested her, and untimely is responsible for her death, Brian Encinia was arrested for perjury. A grand jury found that Encinia lied about the circumstances under which Sandra Bland was removed from her car on the day she was arrested. The video shows that Encinia ordered Bland out of the vehicle under threat of being Tasered. “Get out of the car!” he yells as a frightened Bland complies. “I will light you up!” Encinia coninutes to yell. Encinia’s official statement was that in order to “further conduct a safe traffic investigation. Bland was removed from the car but became more combative. Bland was placed in handcuffs for officer safety. Bland began swinging her elbows at me and then kicked my right leg in the shin.”

This lie was apparent to anyone who watches the video of the incident. Encinia is also recorded calling his supervisor and making false statements to him as well. He tells the supervisor that Bland was combative, and that he did all he could to de-escalate the situation. Luckily, Encinia was called out for his attempts to hide the truth and has since lost his job. It is unfortunate that in the death of Sandra Bland, Encinia is only faced with a perjury charge.

These are only a handful of examples that occurred in the past year. Over and over again we are forced to accept the reality that police lie on a regular basis and only in few cases are these lies ever exposed to the public. Police are masters of re-articulating truth to fit their own narratives. These are but a few examples of what is really happening in our law enforcement communities.

This article (These Cops Prove Truth and Justice Not in the Job Description) is a free and open source. You have permission to republish this article under a Creative Commons license with attribution to the author and AnonHQ.com.