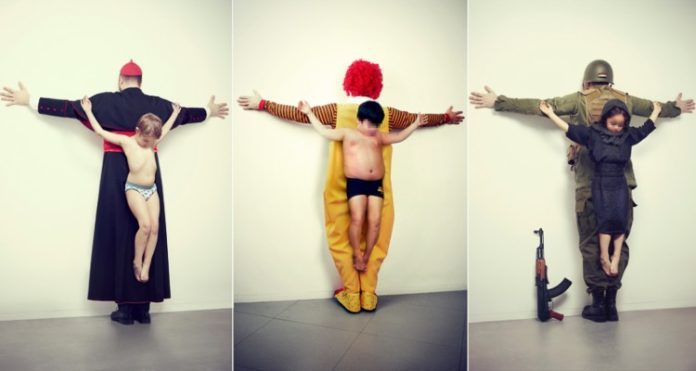 Cuban artist and creative director Erik Ravelo, the man behind United Colors of Benetton’s UnHate campaign that featured doctored photos of world leaders making out, is back with Los Intocables or the untouchables, a shock photography project that captures the evils harming innocent children all over the world.

Each photo shows a child crucified on the shoulders of those who inflict harm on them. Each perpetrator is metaphorically shown turning their backs to their victims, symbolizing the common indifference all of us have when it comes to protecting the children from contemporary illnesses like sex tourism.

Ravelo took a series of photos of children hung like Jesus from a cross, but in the place of the cross were soldiers, surgeons, priests and Ronald McDonald. The images refer to pedophilia in the Vatican, child sex tourism in Thailand, the war in Syria, the trafficking of black market organs “donated” by children in the third world and obesity. A number of the photos are named after the countries where the abuses take place. The gun violence photo is named USA, while the traveling pedophile is called Thailandia.

The project was designed to make a point about the state of childhood globally, he told news.com.au.

“My intention is not to offend anyone but make people think about a problem. All the news about the civil war in Syria involving many children casualties, and particularly in this case the fact that I live in Italy, strongly determined the direction of the series Los Intocables.

“The religious icon is not someone else’s religious icon. It’s my icon too, it’s my culture, it’s my education, it’s the way I was taught to communicate. So, in any case I’m talking about me too. I still don’t understand why some people are mad at me, but they’re not mad about those problems. Some people get offended by the photos but not by the problems the photos wants to talk about.

“Kids represent innocence and the series of Los Intocables aims to preserve and defend the right to childhood, to a clean childhood. So we are preserving kids here. They are even pixilated to preserve and protect their identities.”

The graphic yet the powerful and perfect way to visually drive home the message of child abuse is merely a reflection of a reality that is normally hidden from view or swept under the carpet. Is it outrageous? You decide. The eerie image is meant to represent pedophilia, with the camera adding an element of child pornography. The photo above depicts the dangers of chemical weapons like the nuclear meltdown in Japan. Hooded shooter with three guns and a girl in her school uniform on his back represents how school children are becoming victims of gun violence in the United States. This image refers to the trafficking of organs on the black market, especially Brazil, with doctors harvesting body parts from children. A child in his underwear is placed on the back of a priest marks the sexual abuse scandals that have plagued the Catholic church in recent years. A young girl is ‘crucified’ on the back of a uniformed soldier, bringing forth the harms of war. This image shows how children are becoming obese by falling victim to the marketing and operative schemes of the fast food companies like McDonald’s.

This Article (Cuban Artist Portrays Violence Against Children Through Shocking Artwork [Images]) is free and open source. You have permission to republish this article under a Creative Commons license with attribution to the author and AnonHQ.com.