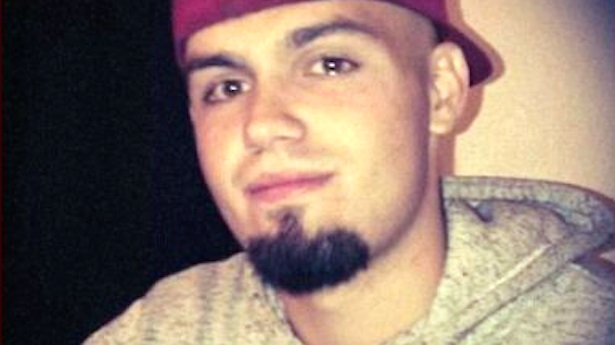 Recently released video from a body camera worn by Salt Lake City officer Bron Cruz shows the officer exiting his car to follow behind Taylor, who was exiting a 7-Eleven convenience store. Cruz raised his gun to Taylor’s back and ordered him to “get your hands up, now!” Taylor, who had his hands in the waistband of his pants, turned around and replied, “No, fool,” and Cruz responded by shooting Taylor twice in the chest, killing him. The whole encounter lasted less than a minute.

Cruz cites fear for his own life as motivation for his actions.

“I wasn’t about to shoot [Taylor] in the back,” Cruz told a Utah court. “I was 100 percent convinced when I saw him turn around it was gonna be a gunfight.”

Cruz had been responding to a call involving a young man waving a gun around when he apprehended then killed Taylor, who allegedly matched the description of the suspect. Unarmed Taylor had visited the store simply to purchase beverages with his friends.

“Nothing that Mr. Taylor did assisted in de-escalating the situation,” Gill said in a statement to the Salt Lake Tribune. “If anything, it escalated things.”

Gill went so far as to point to Taylor’s blood alcohol content and recent Facebook posts as proof Taylor may have been inciting trouble. To be clear, Taylor was on foot, not driving a vehicle that day. Taylor’s emotional Facebook posts about insomnia and homelessness seem to have a tenuous bearing on going to 7-Eleven to purchase beverages and subsequently being shot to death.

Taylor’s family seems to find Gill’s victim-blaming reprehensible, saying based on Taylor’s actual behavior – not police assumptions— this could have happened to anyone.

“It could be your son, your brother,” Gina Thayne, Taylor’s aunt, told the Salt Lake Tribune. “Our family is hurting, and it’s needless and senseless.”

While Gill has made his findings, Salt Lake City Police spokesman Dennis McGowan has said internal affairs is still investigating events that led up to the death of Taylor.