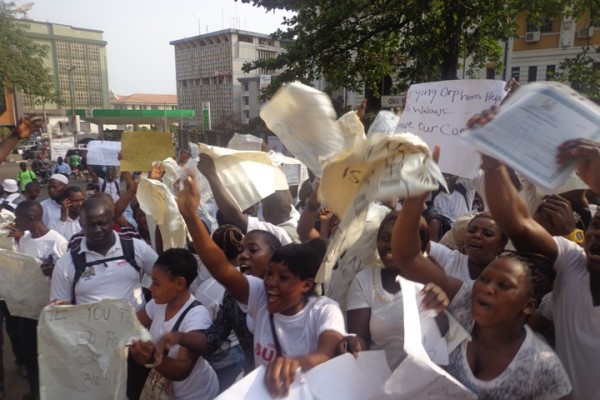 Survivors of the deadly Ebola disease in the West African country of Sierra Leone are holding protests across the country against what they described as total neglect by the government.

According to the United States Center for Disease Control and Prevention, nearly 4,000 people died from the disease in Sierra Leone during the outbreak in West Africa.

The protesters are claiming that some people were killed by the disease because they did not receive proper medical treatment.

The BBC’s Sierra Leone correspondent reports that many of the protesters are women. The women have said that when their husbands died from the disease, the government failed to honour its promise by catering for them and their children. Many of these unfortunate children are now school drop-outs. Their mothers are also jobless. Activists fighting for the rights of Ebola survivors have substantiated the story of the women, saying the government of Sierra Leone has failed woefully to solve the problems brought by the disease. In October 2015, the WHO said that it had been able to bring the disease under control. And on January 14, 2016, the WHO again declared the three most affected countries Ebola-free.

However, less than 24 hours after this declaration, health officials in Sierra Leone confirmed that a new Ebola death had been recorded in the country. The victim, Mariatu Jalloh, is said to have fallen sick in early January. The death was reported in the northern town of Magburaka. Currently, health experts are saying that they have detected the disease in the semen of male survivors. The WHO said all efforts must be intensified to ensure that such men can have their semen checked for traces of the disease.

Some researchers have also said that there is a risk that the virus may become an ever-present disease in West African society.

Ebola was first recorded in sub-Saharan Africa in 1976. At that time, the outbreak happened in Central Africa. When the outbreak began in West Africa in December 2013, the lack of health facilities and experts resulted in the first recorded cases being mistaken for a normal fever, which is common in West Africa. This allowed the disease to spread and go unrecognised for several months. Ebola symptoms include high fever, bleeding and the breakdown of the central nervous system. The disease is said to spread by bodily contact and bodily fluids, such as blood or saliva.

The fatality rate is said to be around 90%, but the current outbreak has a mortality rate of about 55% and the incubation period is 2 to 21 days. There is no proven vaccine or cure as of now, but supportive care such as re-hydrating patients who have diarrhoea and vomiting can help recovery.

This Article (Ebola Survivors In Sierra Leone Protest Against Government Neglect) is free and open source. You have permission to republish this article under a Creative Commons license with attribution to the author and AnonHQ.com