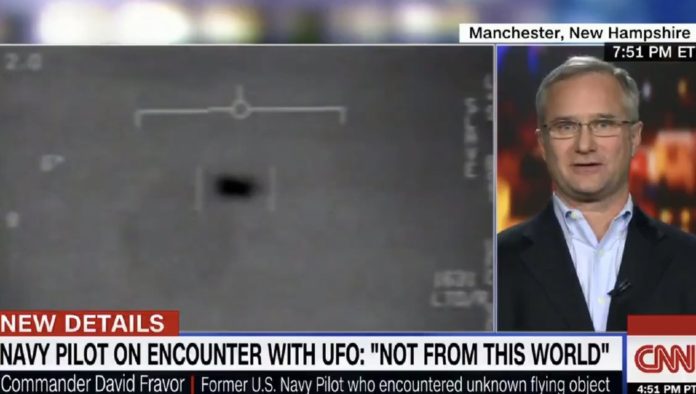 Sightings of Unidentified Flying Objects (UFOs) used to be treated as conspiracy theories in the past but after testimonies upon testimonies from former U.S. military air personnel, it is clear that aliens have indeed visited our planet.

Last week, the U.S. Department of Defense finally admitted it ran a secret multi-million-dollar UFO investigation program from 2007 to 2012 with $22 million in annual funding, which was hidden in its budgets worth $600 billion.

Though the Pentagon has refused to divulge details of the program, a former commanding officer of a U.S. Navy squadron has admitted to seeing a UFO, about the size of his F/A-18 fighter plane.

David Fravor told ABC News he saw the 40-foot-long wingless UFO, which resembled a white Tic Tac and flew at incredible speeds in an erratic pattern, after a break in a routine training mission off the California coast on November 14, 2004.

“I can tell you, I think it was not from this world. I’m not crazy, haven’t been drinking. After 18 years of flying, I’ve seen pretty much about everything that I can see in that realm, and this was nothing close. I have never seen anything in my life, in my history of flying that has the performance, the acceleration — keep in mind this thing had no wings.”

Fravor claimed controllers on one of the Navy ships on the water below reported objects that were dropping out of the sky from 80,000 feet and going straight back up. An object then appeared on the radar as another aviator spotted the unusual flying object, he recalled.

“We look down, we see a white disturbance in the water, like something’s under the surface, and the waves are breaking over, but we see next to it, and it’s flying around, and it’s this little white Tic Tac, and it’s moving around — left, right, forward, back, just random.”

He noted that the speed of the object, which he said had no exhaust trail in infrared scanning, was stunning.

“The object didn’t display the rotor wash typical of a helicopter or jet wash from a plane. The planes flew lower to investigate the object, which started to mirror their movements before disappearing. As we start to cut across, it rapidly accelerates, climbs past our altitude and disappears.

“When it started to near us, as we started to descend towards it coming up, it was flying in the elongated way, so it’s [like] a Tic Tac, with the roundish end going in the forward direction … I don’t know what it is. I don’t know what I saw. I just know it was really impressive, really fast, and I would like to fly it.”

Fravor told ABC that there was no logical rationale for what he experienced that day, but in an interview with The Washington Post, he said he was certain about one thing: “It was a real object, it exists, and I saw it. It was something not from the Earth.”