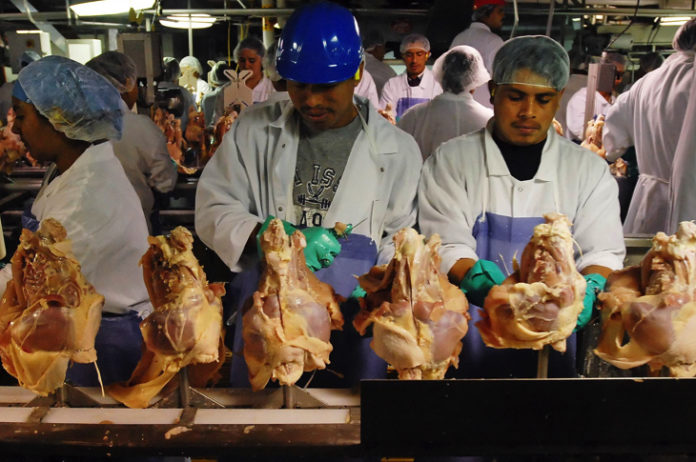 Poultry factory workers laugh at commercials from their companies boasting that they treat their chickens humanely while humans suffer.

Americans often hear about the horrible conditions that some factories in other countries, such as China, force on their workers, but the reality is that some factories in the United States can be just as brutal towards employees. One such example is the poultry industry, which processes millions of chickens across the country everyday, but at what cost?

In recent reports that emerged last year from Oxfam America, the U.S. chapter for a global organization whose aim is to solve poverty, social injustice, income inequality, and advocate for human rights, workers from popular poultry companies revealed the shocking truth about what they endure on a daily basis.

Perhaps the most horrible revelation is that many of the line workers wear diapers because they are repeatedly denied bathroom breaks, causing them to either urinate on themselves or invest in diapers to reduce humiliation. The top 4 poultry companies, Tyson Foods, Pilgrim’s, Perdue, and Sanderson Farms, control more than half of the poultry market and their turnover rate for employees has reached 100% in some years, meaning the workers are treated as disposable and making them more likely to do whatever it takes to keep their jobs.

“To find workers willing to do these jobs, the poultry industry exploits vulnerable people who have few other options: minorities, immigrants, and refugees—even prisoners. Because of their precarious situations, most workers are afraid to speak out or do anything that might jeopardize their jobs,” the report states.

As a result, workers avoid asking for bathroom breaks because they are afraid of being reprimanded, even if they have a special condition that would require them to take more breaks than normal. When they do ask for breaks, workers reportedly said that they were often mocked, ignored, or yelled at for eating or drinking too much. Even someone without special conditions, such as diabetes, being pregnant, or in the midst of menstruation, requires tons of water everyday to keep themselves healthy and hydrated during the grueling work. Those with the special conditions suffer even more.

“Jean, from a Tyson plant in Virginia, says that even though she’s diabetic, ‘I don’t drink any water so I won’t have to go,’” the report said.

Some women started off by wearing sanitary napkins so they could pee while still standing there, but this proved ineffective and now workers, both men and women, often don diapers so they can relieve themselves without leaving the line. This calls both the rights of the workers and the cleanliness of the facilities into question.

All workers that were interviewed had pseudonyms in the report, making it difficult for any of the companies named to fire or otherwise reprimand those who came forward but also making it impossible to verify whether the reports were factual. The National Chicken Council and the U.S. Poultry and Egg Association accused Oxfam America of painting the entire industry with a broad brush based on only a few testimonies and all of the companies denied the allegations, saying they have policies that include ample breaks.

Though the factory workers want to keep their jobs, they don’t want to continue being treated in this manner or constantly worrying about whether their question of visiting the bathroom will cost them their job.

With an industry that has workers processing a whole chicken in as little as 2 seconds each and has doubled its rate of production in just 35 years, it’s no wonder the workers are suffering as a result. Some have said that they laugh at commercials where the companies say they treat their chickens humanely while they continue to treat their human employees terribly.